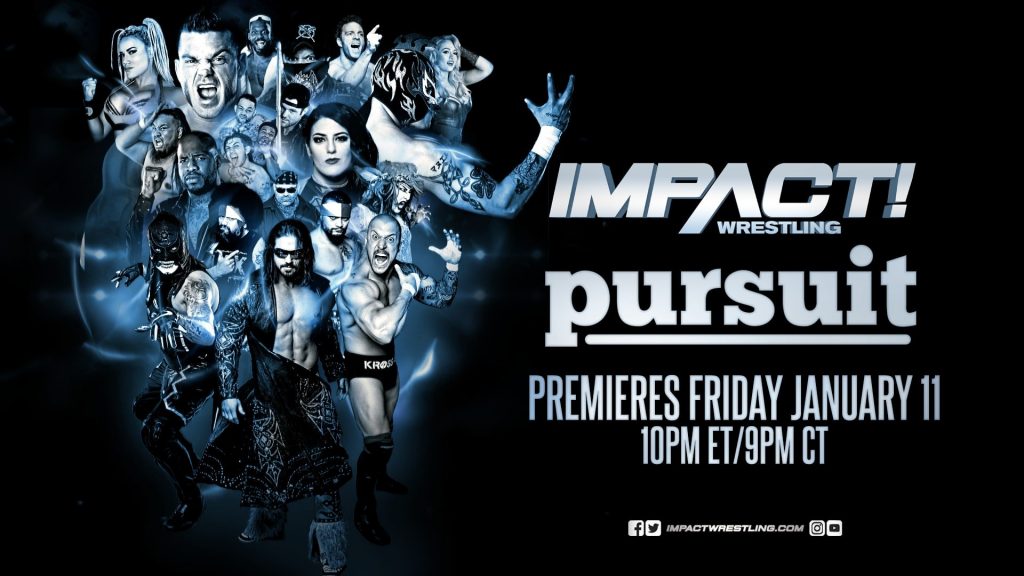 IMPACT! to Premiere Weekly on Fridays at 10:00 p.m. ET on Pursuit Channel, Starting on Jan. 11

TORONTO | LUVERNE – IMPACT Wrestling, a subsidiary of Anthem Sports & Entertainment Corp., announced today it has entered into an agreement to broadcast its flagship weekly two-hour program IMPACT! nationally across the U.S. on Pursuit Channel, the most widely distributed outdoor network and one of the fastest growing channels in the country.

“Pursuit Channel is a natural fit for IMPACT!” said Ed Nordholm, president of IMPACT Wrestling. “It has a passionate viewership base that correlates strongly with our core audience, and is one of the few broadcast destinations that is expanding its footprint, enjoying a 15% increase in broadcast distribution this year alone. With IMPACT Wrestling coming off a tremendous year of audience growth globally and positive fan engagement, we look forward to leveraging our respective resources to bring fans more of the wrestling content they want to see: tougher, edgier action.”

“Pursuit Channel is pleased to welcome IMPACT Wrestling into our Friday night lineup of popular shows,” said Rusty Faulk, CEO and founder of Pursuit Channel. “IMPACT Wrestling programming is perfect for our audience, which enjoys adventurous content to feed their wild side. We look forward to a long partnership and providing our fans with new and exciting world-class content while expanding IMPACT Wrestling’s audience to a new base.”

Showcasing top professional wrestling stars such as IMPACT World Champion Johnny Impact, who starred in the most recent season of the hit CBS show Survivor, plus Brian Cage, Eli Drake, Moose, Eddie Edwards, Sami Callihan, Pentagon Jr., Fenix, Rich Swann, the high-flying X-Division and the Knockouts, including Champion Tessa Blanchard, Taya Valkyrie, Rosemary, Allie and Su Yung, IMPACT! has been a leading destination for professional wrestling fans, televised globally in 120 countries since its inception in 2002, while growing its popularity and reach on YouTube, Twitch, Pluto and social media platforms.