Charly Caruso On The Impact Of Her Parents’ Divorce, & Advice She Gave Paige 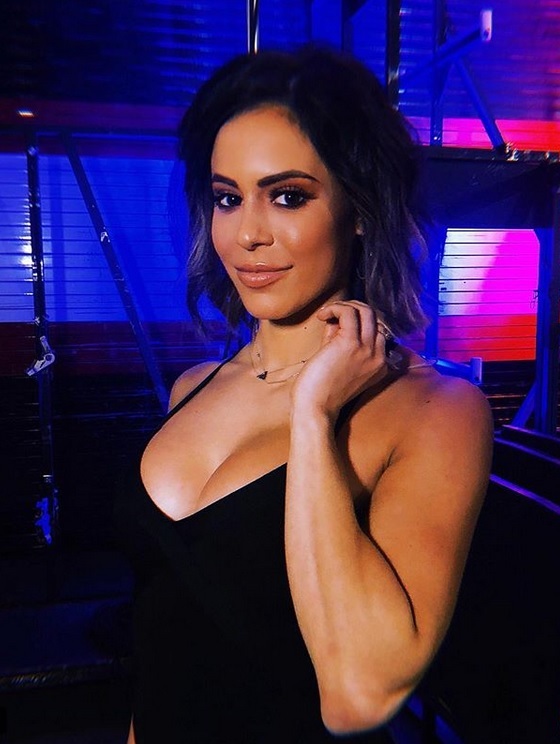 Charly Caruso was on Chasing Glory with Lilian Garcia, discussing her parent’s divorce, her initial contact with WWE, and much more…

On Her Initial Contact With WWE: It just so happened that SmackDown was in Indianapolis [her hometown] and I was with a friend of mine, who was a huge WWE fan and he had backstage passes, so he asked me if I wanted to go because he knew that when I was growing up I was really into it. For a couple year span [I was into it]. It was the height of the Attitude Era and I loved it, so him and I would talk about it sometimes and he was like, ‘Hey, I have these passes and tickets to the show. Do you want to go?’ I was like, ‘Of course.’ So, I come to SmackDown and I’m just backstage hanging out and I see Mark Carrano, whom I recognize from Total Divas, so at this point I’m unemployed technically…and not really sure what my next move is, so I approach him and say, ‘Hey, I’m a sports broadcaster, do you think I could pass along my reel and you can take a look at it? If nothing else, you can give me a critique.’ I didn’t know how things worked around here. He said, ‘Sure, why not?’ I send it to him. I hear nothing back for a couple months. I reach out to him and he says, ‘Resend it to me,’ so I send it to him again and he says, ‘Oh, I think you’re good. I’m gonna pass this along to Michael Cole.’ From there he was like, ‘We want you to come in and audition.’ At this point, I had already verbally accepted a position to be a sports anchor in Washington, DC, at an old station I interned at, so I had to backtrack after the audition and WWE offering me a position. I said, ‘I know I said I would take this job, but after thinking about it, I’m actually gonna go with WWE,’ so here I am.

On The Life-long Impact Of That One Day: I came to SmackDown and passed along my reel and if it wouldn’t have been for that moment, I never – I promise you – would never have been working for WWE. It was just one of those perfect – I was at the right place at the right time and I met the right person and we developed a relationship. It’s crazy to think about just that one day now has affected the past 2.5 years of my life and probably will for the rest of my life….I said I already accepted a job in DC and I said, ‘You know what? What’s the harm in going and auditioning? Why not make the contact and who knows what could happen down the road?’ The way it worked out I went and auditioned and I was so loose about it because I was like, ‘Who cares?’ I actually ended up probably doing better than I would have had I been like, ‘Oh my God, this is the job I want.’ I did great and they were like, ‘We don’t have an open position because we wanted to get you in here anyway because with WWE you never know what could happen.’ Three days later – I just put my deposit down on my condo in DC because I was like, ‘This is what’s going to happen’ – and Michael Cole called me and said, ‘Hey, remember when I told you we didn’t have an opening, but anything can happen? Now, we have an immediate opening.’ It was when Brandi left and it was just suddenly. It all happened so suddenly, so then they were like, ‘We want to hire you.’ I was like, ‘Shoot, what do I do?’ I’ve already now totally focused my sights on going to DC and it was just a few weeks of ‘What Should I Do?’ I ended up here and it’s just wild.

On Struggles With Her Parents’ Divorce: My dad and I – we have a different relationship. We’re super close, not like my mom and I, but you know my parents are divorced now too. The divorce was finalized at the end of my sophomore year of college. It was tough because I was old enough to know exactly what was going on and I was aware of the situation. No divorce is easy. Some divorces are more difficult than others. I would categorize this in the more difficult than others just because the circumstances surrounding it, but it was tough, so it is still something that I think still affects me in ways that I don’t even realize. I was actually just this morning watching a video that my friend posted online of her parents playing air hockey and they were having so much fun and I was like, ‘I never had those memories of my parents.’ Just like having tons of fun together – not that I didn’t, but when I look back on my growing up, those aren’t the first things that come to mind and I think that affects me in a lot of ways where I have kind of a skewed vision on what a relationship is and should be.

On Her Father Not Often Being Around When She Was Growing Up: Back then I wasn’t as aware. My dad would come to things, if I had games or whatever, but it was usually my mom, for example, taking me to practice or doing my homework with me post-practice, or waking up early with me to study for a test, but it was just like the normal thing. It was just the role my mom always filled. I don’t think I realized it then, but now looking back, I do have some resentment towards my dad for not being there probably as much as he should have, but there’s not much you can do. My dad and I are in the process of trying to repair our relationship a little bit and like I said, we’re not not close. We are close, but it’s just a very different relationship than what I have with my mom and not the relationship – I think – that as his only daughter, I would want to have with him, but we are trying to take steps to get closer and in deeper ways, not just on the surface.

On Whether Her Parents Fought In Front Of Her: Yeah, I would be around, whether it would be intentionally in front of me or I would hear it from my room or whatever the case, but yeah I heard a lot of fighting and being that my mom and I were so close usually my mom would come and talk to me about things that were going on. It wasn’t like she was trying to make me pick sides. My mom and I are like best friends and like sisters and maybe not even necessarily talking to me, but I would hear her talking to her mom about it and I’d overhear. Looking back to where we were having the discussion about siblings [Caruso is an only child], I think that is one area that I would have loved to have someone that is a support for me. It is a lot when you’re an only child and seeing this and you don’t really have anyone to turn to. I had my friends, but they didn’t understand because they weren’t there, so it would have probably been nice to have someone and even now like, ‘What do you think I should do?’ You don’t want to go to either one of your parents because they’re divorced and it’s not like they necessarily care for each other in that way.

On The Impact Her Parents’ Relationship Has On Her Own Relationships: I think, for me, it’s created a little bit of a barrier because when I meet someone, I’m pretty guarded and I don’t know if it’s necessarily because of him. We all have past experiences that have our defenses up and things like that, but I think there is probably part of me where I’m just not used to seeing these really healthy and strong relationships, so then I’m almost like, ‘Is it possible for me to have one?’ I will also say that dating now and relationships are so much different now with social media and technology. Trying to date in this era – especially in New York City – it is a trip.

On Past Difficulties Dating & Advice She Recently Gave WWE Superstar Paige: I’ve had guys that I dated that were like, ‘Are you hooking up with the wrestlers?’ OK, just relax, if you’re my boyfriend there’s nothing to worry about. You shouldn’t have to worry about other people and I think a lot of people get intimidated because they’re like, ‘You’re around these attractive people all the time,’ or when I was with a news station and I was covering the NFL and the NBA and they were like, ‘I don’t like you being around those people.’ I was like, ‘This is my job and you don’t really have a say in it and this is how it’s gonna be.’ You need a really strong guy that’s secure with himself and also just supportive of what you’re doing….I was having this conversation with Paige because she just broke up with her boyfriend semi-recently and I told her, ‘Every guy says that they want this strong confident women and that’s what they love about you and it’s only a matter of time in a lot of situations where they start resenting you for that and then they’re like they can’t keep up with you or they don’t like that you’re so dominant or so successful because it makes them feel insecure.’ It isn’t the case with everybody, but in my past experiences that is how it has been a lot of the time.