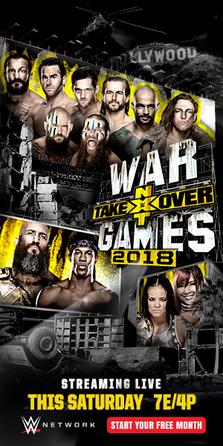 NXT TakeOver: WarGames II opens with a video package hyping all four of the matches scheduled for the show. We then go into the Staples Center in Los Angeles, California, and Mauro Ranallo, Nigel McGuinness, and Percy Watson welcome us to the show.

Matt Riddle’s music hits and “The Bro” makes his way to the ring. Riddle grabs a mic and says he is not scheduled to have a match tonight, but Kassius Ohno interrupted him on the kickoff show. Riddle says they are scheduled to wrestle next Wednesday on NXT, but they are in LA and there are two rings. Riddle says he will knock Ohno out in both of them…bro. Ohno’s music hits and he comes out with a mic. Ohno says Riddle is too stupid to know that he isn’t supposed to be out here and too stupid to realize that he isn’t ready for TakeOver. Ohno says he hopes Riddle has enjoyed this, because he is about to knock him out. The referee calls for the bell.

Match #1 – Singles Match: Kassius Ohno vs. Matt Riddle
Ohno charges at Riddle, but Riddle catches him with a knee strike to the jaw and gets the pin fall.
Winner via pin fall: Matt Riddle (0:07)

Match #2 – NXT Women’s Championship Two-Out-of-Three Falls Match: Shayna Baszler (c) vs. Kairi Sane
Sane kicks Baszler into the corner and drivers her shoulder into her midsection. Sane drops Baszler to the mat and then delivers a neck-breaker. Sane delivers another neck-breaker and then chops Baszler against the ropes. Sane connects with the Sliding D, and Baszler rolls to the floor. Sane connects with an elbow strike from the apron and then tosses Baszler back into the ring. Marina Shafir and Jessamyn Duke attack Sane as the referee checks on Baszler. Baszler locks in the Kirifuda Clutch and Sane taps out.
Winner of the first fall via submission: Shayna Baszler

Baszler immediately takes Sane down with a knee strike and goes for the cover, but Sane kicks out at two. Baszler locks in the Kirifuda Clutch again, but Sane makes it to the ropes. Sane fights back with a few strikes, but Baszler takes her down again and locks in a modified single-leg Boston Crab. Baszler stomps Sane’s face into the mat and then delivers a few kicks to her back. Baszler applies a neck wrench, but Sane counters with a quick roll-up for a two count. Sane gets another quick roll-up, but Baszler counters and locks in the Kirifuda Clutch again. Sane rolls through for another two count, but Baszler comes back with more kicks to the back. Sane fights back and they brawl for a bit before Baszler drops Sane with a clothesline. Baszler charges at Sane, but Sane pulls the rope down and Baszler lands on the apron. Baszler grabs Sane, but Sane counters with a spike DDT on the apron.
Duke and Shafir try to interfere again, but Sane takes care of them both. Sane goes up top and delivers an In-Sane Elbow to all three women. Sane tosses Baszler back into the ring and goes up top again. Sane delivers another In-Sane elbow and gets the pin fall.
Winner of the second fall via pinfall: Kairi Sane

Sane takes Baszler down with three Interceptors and then connects with spinning back fists. Sane goes back up top, but Baszler cuts her off with a right hand. Baszler and Sane battle on the top, but Sane eventually takes her down with a sunset flip power bomb. Sane goes for the cover, but Baszler kicks out at two. Sane delivers an Alabama Slam and goes up top, but Shafir and Duke get involved again. Dakota Kai runs down to help out, but Duke and Shafir overpower her as well. Io Shirai runs down as well and takes out Duke and Shafir with a moonsault. Sane goes back up top and hits the In-Sane Elbow, but Baszler counters with a roll-up and gets the pin fall.
Winner of the third fall via pinfall and still NXT Women’s Champion: Shayna Baszler (10:56)

The Undisputed ERA is shown backstage. Adam Cole is leading the group in a pep talk before the WarGames Match.