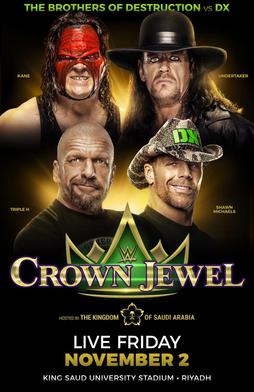 Despite public backlash and pressure to cancel the event, WWE Crown Jewel goes on as planned today without the presence of John Cena or Daniel Bryan. The two stars have reportedly refused to work WWE’s second show in Saudi Arabia, and were subsequently written out of the show this week on Raw and SmackDown.

For those who haven’t been watching the international backlash, Saudi Arabia has been accused of what accounts to state-sanctioned assassination of a journalist. Washington Post columnist and permanent US resident Jamal Khashoggi was last seen entering the Saudi Arabian consulate in Turkey a few weeks ago. That was the last time he was seen alive. Despite Saudi Arabia’s public insistence that Khashoggi’s death was an unintentional result of a heated interrogation, that’s hard to believe considering reports that a 13-man hit squad with a forensic pathologist wielding a bonesaw were handling that “interrogation.”

Several US companies have withdrawn from business in Saudi Arabia since news of the alleged assassination broke. Four sitting US Senators publicly stated that WWE should rethink their relationship with Saudi Arabia. Yet no matter how much pressure was placed on them, WWE has proven once again that nothing is as convincing as money. Refusing to take the monetary hit of cancelling the event, WWE Crown Jewel goes on as planned today with several championships on the line and a WWE World Cup to determine “the best in the world.”

One of the biggest stories of the night is the first ever WWE World Cup. The tournament was reportedly suggested by Saudi Arabia out of jealousy that Qatar will host soccer’s World Cup in 2022. While the tournament has been criticized by fans for being an entirely American field in a “World Cup”, that didn’t stop the superstars involved from pushing themselves to be called “the best in the world.”

The quarterfinals were mostly short, as is needed in a tournament like this where several stars will have to work multiple matches in one night. Rey Mysterio handily dispatched Randy Orton in the opening quarterfinal, but Orton assaulted Rey after the match and left the former World Champion damaged heading into the semifinals.

Despite a heavy dose of damage by Bobby Lashley, even his hype man Lio Rush couldn’t help Lashley defeat The Architect. Despite lingering damage from Dean Ambrose’s recent attacks, Rollins was able to land a stomp to defeat Lashley and advance to the semifinals.

In the two semifinal matches, the damage from their quarterfinal efforts was on display with all four superstars. Rey Mysterio fought hard against The Miz, but the veteran ultimately ate a Skull Crushing Finale that let Miz advance. In the second semifinal, Seth Rollins took on recent rival Dolph Ziggler. Rollins fought hard, but his injuries and Drew McIntyre’s outside interference were too much to overcome.

Ziggler vanquished Rollins, and the final contest was set. In a throwback to one of the best rivalries on SmackDown Live in 2016, the finals of the WWE World Cup saw The Miz taking on Dolph Ziggler. To add to the stakes, Shane McMahon has threatened to fire any SmackDown star that makes it to the finals only to lose to Raw.

As the finals arrived, there was commotion before the match began as Ziggler and Miz spilled to the outside. Somehow during that, The Miz injured his knee and was unable to compete in the mach. The referee was about to declare Ziggler the winner by forfeit, but SmackDown Live Commissioner Shane McMahon suddenly announced he would be replacing The Miz in the final. Corbin tried to interfere on Ziggler’s behalf and was ejected to the back. Ziggler fought hard, but a night’s worth of matches and fatigue finally caught up with him and Shane McMahon pulled out the victory. That’s right. Shane McMahon is…the best in the world?

The majority of the night’s non-World Cup contests were championship contests. Things got started on the Kickoff Show as Rusev challenged Shinsuke Nakamura for the WWE United States Championship. The namesake of Rusev Day fought hard, but a low blow and a Kinshasa were too much as Nakamura picked up the win and escaped with his championship. The second title challenge of the night saw The New Day enter the arena on a giant Magic Carpet of some kind. Normally The New Day have a numbers advantage, but The Big Show shocked everyone and joined forces with The Bar in recent weeks. Despite a valiant effort by the former champions, The Bar were able to pick up the win and retain their SmackDown Tag Team Titles.

Next up we saw the WWE Championship defended as AJ Styles took on longtime rival Samoa Joe. This was an accelerated rematch as Daniel Bryan reportedly refused to work the Crown Jewel event. As a result, an angle this week on SmackDown Live set up Samoa Joe’s chance to challenge AJ in Saudi Arabia. Like all of their previous contests, things were as hard hitting as ever. Samoa Joe gained control on more than one occasion, but a Phenomenal Forearm was too much to overcome. With that one powerful strike, AJ picked up the victory and his nearly year-long reign as WWE Champion continues.

In the night’s final championship contest, the vacant Universal Championship was up for grabs. As I’m sure most fans know, Roman Reigns had to vacate the title two weeks ago on Raw due to his current battle with leukemia. It was an emotional moment, and we all send our thoughts and prayers out to Roman as he fights the disease. Of course, as is always the case in WWE, the show must go on. With Roman out of Crown Jewel, a triple threat shrunk to a singles contest between Brock Lesnar and Braun Strowman.

As he always does before the match, Paul Heyman delivered a spoiler instead of a prediction by proclaiming Brock Lesnar would win the Universal Championship. Acting Raw General Manager Baron Corbin presented the Universal Title to the competitors and suddenly struck Strowman from behind with the belt before the bell rang. Corbin immediately called for the match to start, and Lesnar went on the offensive without hesitation. After a string of F5s, Strowman somehow kept kicking out. In a moment of frustration, Lesnar delivered an F5 that sent Strowman over the ropes crashing to the mat on the outside. When Strowman finally got back into the ring and ate another F5, the three count finally rang out and Brock Lesnar is once again the Universal Champion.

With the close of the WWE World Cup, it was finally time for the night’s main event and a heavy dose of nostalgia. For the first time ever, D-Generation X faces off with The Brothers of Destruction. In his first match back since being retired by The Undertaker all the way back at WrestleMania 26, Shawn Michaels teams with longtime friend Triple H to take on The Undertaker and his brother Kane.

While it was most likely a match that the Saudi Arabian leaders wanted from WWE, this also felt like another chapter in setting up part three of Shawn Michaels vs The Undertaker. Seeing Shawn return to action at this controversial event in a match that would’ve been much more interesting two decades ago is conflicting, to say the least. Triple H started the match against Kane, but it didn’t take long for Michaels to join the fray. HBK didn’t appear to have missed a step as he took on The Big Red Machine, but showed some definite trepidation as Kane tagged in The Undertaker.

For the first time in years, The Undertaker stood across the ring from Shawn Michaels. Unsurprisingly, the nearly ageless Shawn Michaels looked like his old self in the ring, minus some hair. HBK actually looks healthier and in better shape than he was when he retired. The action eventually spilled to the outside and Kane chokeslammed Triple H through the announce table. With Triple H down, The Brothers of Destruction were firmly in control as the onslaught continued.

Undertaker hit his patented leg drop on the apron to Shawn before rolling the Hall of Famer back into the ring. A quick tag and the Knox County Mayor aka Kane got back in the action and dealt more damage to Michaels. As Kane and HBK fought on the turnbuckle, a stiff right hand knocked Kane to the outside. In an homage to his high-flying roots, Shawn suddenly came flying off the top with a moonsault onto both Kane and The Undertaker on the outside. Triple H was back to his feet and got the tag soon after, giving DX an upper hand once again.

Triple H looked poised to finish The Undertaker off after hitting a Pedigree, but ‘Taker locked in Hell’s Gate out of nowhere. Shawn tried to break it up, but was stopped by Kane. Sweet Chin Music caught Kane right in the mouth and he crumbled onto Undertaker, breaking up the submission. The Undertaker and Kane went for a pair of Tombstone Piledrivers, but some fingers in eyes let DX escape. After another Sweet Chin Music and a Pedigree on Kane, Triple H pinned The Big Red Machine to get the win for D-Generation X.