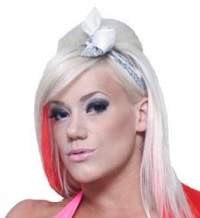 “Lucha Royalty” Taya Valkyrie, who has been wrestling since 2010 and was trained by longtime WCW star Lance Storm, will be the special guest on the weekly IMPACT Wrestling Press Pass Podcast on Wednesday, October 31, starting at 2pm ET.

Valkyrie will discuss everything Halloween, including her favorite candy, of course, along with Josh Mathews and Ross Forman. More so, Valkyrie will debate everything Knockouts-related, starting with the Knockouts Championship, now held by Tessa Blanchard.

Valkyrie has had an illustrious career in Mexico. Competing for Lucha Libre AAA Worldwide (AAA), she is a former two-time and the longest-reigning Reina de Reinas Champion in history.