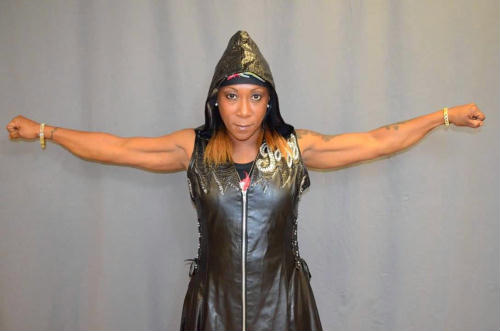 On her NWA Documentary (22:05)
Lagana came and did this documentary on me while my family and I were still in Louisiana. It was a great set up for me to let the world know exactly how I feel about this industry and being underrated and overlooked. NWA 70 was my time to shine and show the world why I am still considered the Baddest Bitch!

On Penelope Ford Challenging For the NWA Women’s Championship (23:44)
People really thought Penelope was going to be my top competition? Really? I mean I hope she wasn’t going to flake out and call herself a loser. I guess everybody gotta talk a little shit right? Gotta put yourself over because nobody else will. Penelope is alright, but she’s been in the game for 2 or 3 years and I have over 20 years experience. There’s no competition there!

Advocating for More Mixed Tag Matches & Challenging Stephanie McMahon (25:47)
What I’m interested in is doing mixed tags. I’m really pulling for someone to book Rodney and myself as a tag team. You can say whatever you want but we really are the power couple when it comes to wrestling in this industry. I’m talking about my Husband Rodney Mack ok? We are pound for pound the baddest dogs around and we claim it! If Stephanie McMahon and HHH want a match just let me know do I sign a piece of paper or just show up with my gear? You think I would back down from that? Stephanie? Oh my God; PLEASE!

Surprised WWE is putting on an All Women’s PPV (27:47)
I never thought I’d ever see that but I’m glad they’re finally opening their eyes and giving women a showcase for their abilities on such a platform. For so many years they just wanted T and A out there and now they’re giving Women an opportunity to wrestle. But I don’t give a damn about their Evolution because as the NWA Women’s Champion I’m creating my own Evolution!

Opinion of Jordynne Grace & Their Upcoming Match (28:45)
I remember Jordynne when she first started. I was walking in the building and she was walking out with her Mom. Her Mom was right there by her side and was all for Jordynne being a Wrestler. To have support like that from a Parent at such a young age really stuck out for me big time. But Jordynne is basically fresh out of College and I’ve been in the league over 20 years. I got the experience over her.

Less Is More in Wrestling (32:23)
A lot of times this younger generation talk about those my age and call us old and washed up because we can get over without doing all that crazy shit. They have to go out there and bring everything to the ring but the kitchen sink to try to get over. I go out there and do a headlock match and get over just as much as they go out there doing three moonsaults and go over the top rope. Old School because The Bitch is Back and I’m here to make a statement. I ain’t taking no shit!

Jazz gives more info regarding her Personal Training business in Texas plus a special message to all of her fans. Hear latest edition of the Duke Loves Rasslin Podcast on Soundcloud, Itunes, Youtube and other leading Podcast Apps! https://buff.ly/2AtRKlm