10/9/18 Smackdown Live results from Indianapolis, IN 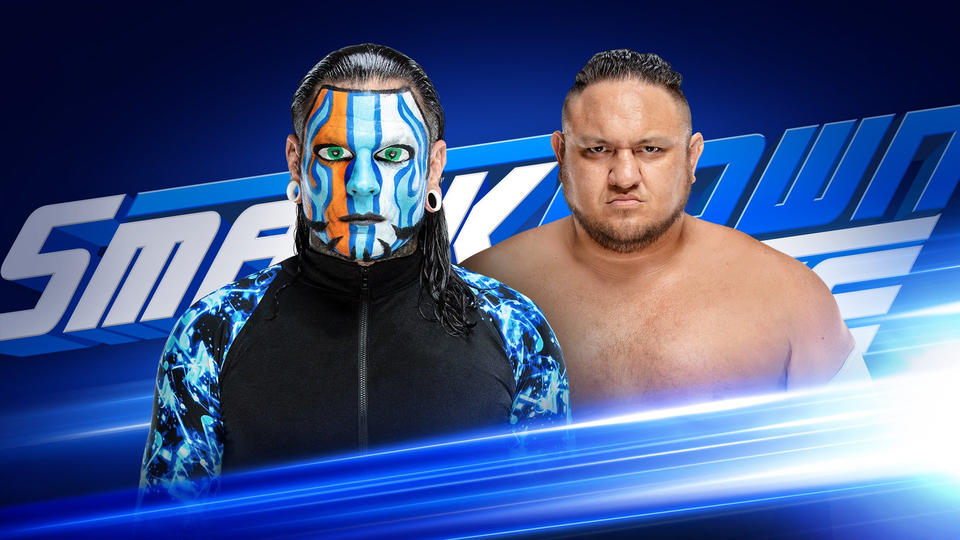 Match 1: Singles Match for SmackDown Womens Championship – If Becky Lynch is Disqualified she loses the title.

Missed the first part of the show due to internet issues.

More back and forth between the two. Becky connects with a knee to the face. Becky goes for the Dis-Arm-Her but Flair takes her down. Becky takes Flair back down and puts a knee to her face to keep her down. Flair looks to turn it around on the mat and ends up catapulting Becky into the turnbuckle. Becky ends up on the floor and Flair follows to keep control. We go to commercial.Back from the break and Flair goes to the top but Becky slams her to the mat. Flair continues to clutch her arm as Becky weakens it for the submission. They tangle in the middle of the ring and Becky rocks her with a fist full of hair. Becky with a Bexploder suplex for a close 2 count. Flair unloads with chops in the middle of the ring now, knocking Becky into the ropes. Flair with a big back suplex. Flair is slow to make the cover but she kips up and stumbles around.Flair goes back to the top but Becky yanks her by the leg, bringing her face first into the mat. Becky goes to the top now. Becky leaps but Flair moves out of the way. Flair rolls her for a 2 count. Becky drops Flair with an enziguri. Becky goes back to the top but Flair knocks her off by hitting the top rope. Flair approaches but Becky rocks her from the top. Becky rolls Flair from the top rope to the mat, applying an armbar. Flair fights it and powers up, slamming Becky with a sitdown powerbomb for a 2 count. We go back to commercial.Back from the break and Flair goes for the Figure Four but Becky kicks her face into the turnbuckles. Becky ends up grabbing her title and walking away, trying to get counted out. Flair stops h er and brings her back into the ring. Flair ends up going into the referee and he’s distracted now. Flair gets dropped. Becky picks up the title and the referee sees her raising it in the air, thinking she was using it when she wasn’t. Becky argues with him. Flair rolls her up and they trade pin attempts. Flair with a big Spear. Becky rolls out of the ring to the floor as the referee counts. Fans chant “this is awesome” now.

After the bell, Becky walks up the ramp but Flair chases her and comes from behind.. Officials try to break it up. Flair runs back up to the stage and hits a Spear through the LED boards. Adam Pearce and other WWE officials are out to check on them both. Pearce calls for a trainer as Flair is laid out on top of Becky. We go to replays and the announcers play up the seriousness of the situation.

Back in the ring Jeff Hardy works on the injured knee of Samoa Joe and the referee calls for the bell and Jeff Hardy wins via referee stoppage.

We are informed that Part 2 of what happened in Milwaukee with Aiden English, Lana and Rusev.

Next week is SmackDown 1000th episode and Evolution will be making an appearance.

Up next is The Miz with MizTV and guests Daniel Bryan and AJ Styles.

Miz is in the ring and says he has been told to be professional with his guests tonight, Miz introduces AJ Styles first. Miz asks AJ about his family after what Joe was saying, Miz mocks Daniel saying you will be respected and he will tend to your garden if you ask him, and on, Miz introduces Daniel Bryan, Out comes Daniel Bryan.

Daniel Bryan shakes the hand of AJ Styles, Miz says people don’t want to see a handshake, Daniel says do you want to talk about our Super Show Down match because it wont take long. Miz isn’t happy, Miz says I will remain professional, AJ you have been champion 11 months and how does Daniel Bryan rank, AJ says Samoa Joe is my biggest competitor and made it personal, this match will stay in the ring in the house that AJ Styles built, Daniel Bryan says AJ Styles has been worthy proving he is a champion holding it for 300 days, he earned respect on holding it, I am glad AJ Styles thinks I can beat him, but I know deep down I can beat AJ Styles. AJ says no disrespect but you haven’t faced anyone phenomenal, Daniel says we are having fun poking at 2 minute man, here is the truth, match at Crown Jewel WWE Championship, very reason I fought coming back out of retirement, my dream actually not to bring back Team Hell No, fight with the jerk The Miz, my dream was winning the WWE World Championship, the only thing standing in way of achieving my dream is you, AJ and Daniel stand up and AJ says I am not moving for you or anybody, Miz says it took you long enough, AJ asks Daniel how good it is to punch The Miz in the face, Miz exits the ring and I am keeping my mouth shut, you stole my opportunity Daniel Bryan, and the referee didn’t see my shoulder up, I asked for a match from Paige she said No, I have knocked you out and won multiple times, AJ you are annoying with a bad accent, title is less relevant and prestigious, title doesn’t main event PPVs because whoever wins I face them next. Miz says wipe smerk of your face, as you facing the man who beat Daniel Bryan last week. Music of Shelton Benjamin.

When we return from break, action is underway and The Miz and Daniel Bryan are on commentary for this match.

Shelton Benjamin is in control of AJ Styles,

(During this match my internet kept on cutting out)

After the match Daniel Bryan is applauding AJ Styles after his win.

Up next Aiden English Part II about what happened in Milwaukee.

Aiden English is in the ring with Directors Cut for One Night in Milwaukee, Video package is shown and it shows Lana thanking Aiden English for helping Rusev and then something is about to happen and Aiden stops it has a proposition and calls out Rusev. Aiden says I will destroy the tape and it never be seen again if you kick Lana to curb, end it and reunite Rusev Day. Lana comes out and Rusev says play that tape in full, Lana says I will play it in full, Rusev says you got hacked and Aiden says how and then Lana plays the video, video continues and then Lana says I need to leave and Aiden English is exposed, Aiden says when you are sick of those Rusev Days you can enjoy Aiden nights, Rusev runs towards Aiden English and catches up with him but Aiden English runs away.

We are informed Rey Mysterio returns to SmackDown 1000th episode, and will be in a Crown Jewel World Cup Qualification Match against Shinsuke Nakamura.

End of the match sees Randy Orton go for the punt kick, then Big Show tries a chokeslam to no avail and out of nowhere, referee gets distracted then a RKO out of nowhere for the win.