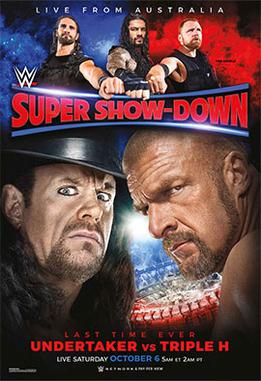 Here are the results from the Super Show-Down pay-per-view which took place earlier today in Melbourne, Australia.

The main event saw both Kane and Shawn Michaels interfere multiple times in the match and after the ending came, all four men stood in the middle of the ring hugging each other and raising each other’s arms as fireworks went off in the background. But that did not last long as Taker and Kane turned on Triple H and Shawn Michaels, effectively ending the show of respect. HBK got the last chokeslam through the announce table and the show then faded to black with the Brothers of Destruction walking to the back.