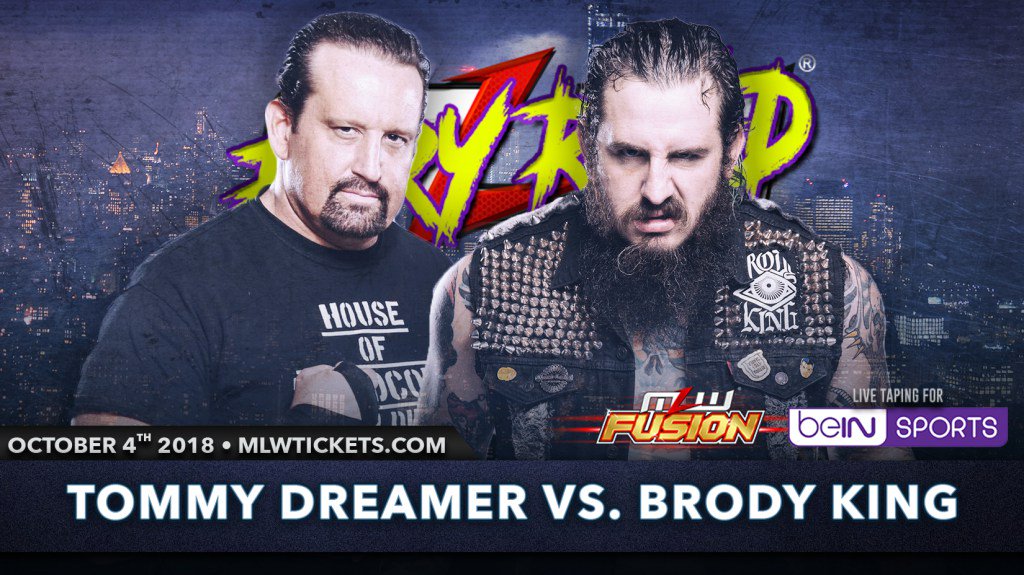 NEW YORK – What happens when the “Innovator of Violence” takes on 6’5” California bounty hunter Brody King? On October 4th at Melrose Ballroom in Queens, NY we will find out as Tommy Dreamer vs. Brody King is signed for MLW FURY ROAD: an MLW Fusion TV taping. Tickets start at just $20 at www.MLWtickets.com.

“I believe in violence. It’s the only thing understood universally,” says the wild brawler Brody King. The dominate conjurer of chaos has been a force to reckon with in MLW but things will escalate to the extreme as he takes on New York’s own Tommy Dreamer.

Dreamer, making his MLW debut in singles competition, enters the match as a hometown favorite with an uncanny threshold for pain and penchant for hardcore violence.

Brody has been rumbling backstage at MLW events seemingly fixated on one of the gods of violence in Dreamer. Now, he gets his shot at the legend. With media from around the world on hand, will the “Intelligent Destroyer” crush the legend in his backyard? Or, will Dreamer prove one more time why he is forever the “Innovator of Violence”? Find out LIVE October 4th in New York City!

Tickets start at $20 for this MLW FUSION taping. [Buy tickets]

More matches will be announced in the coming weeks on MLW: FUSION and MLW.com. Plus, it’s a TV taping for MLW FUSION on beIN Sports!

Tickets start at $20 at MLWTickets.com! There are limited VIP tickets available which includes early entry (5:30pm Eastern) featuring a Pre-Show Meet and Greet with select MLW Talent plus complimentary poster.

Please note: General Admission SRO Tickets are: $20 for advance sales, $25 Day of Event at the door.

You can purchase tickets today at MLWTickets.com.

MORE ABOUT THE VENUE:
Located in the heart of Long Island City just minutes away from Manhattan, the Melrose Ballroom is one of New York City’s premiere exclusive venues for live performance, music, and entertainment shows.

MLW Radio Network is the leading provider of professional wrestling podcasts in the world with 5-6 podcasts in the top iTunes 100 in the sports category on the average day.

MLW content has been distributed commercially in in the United Kingdom, Japan, Germany, India, Denmark and Bangladesh among other territories.