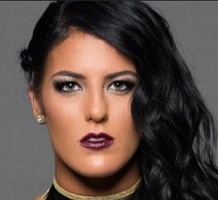 Tessa Blanchard is driven to claim the Knockouts Championship, and no one will stand in her way, period!

Tessa – the granddaughter of wrestler Joe Blanchard, the daughter of Tully Blanchard and the stepdaughter of Magnum TA – will discuss her Championship drive on Thursday, August 9.

Also on the Teleconference, Josh Mathews will be available for the first 10 minutes with major Bound For Glory news, updates, and more.

Blanchard has been wrestling since 2014 and has quickly built a solid reputation around the world, including Lucha Underground. She made her IMPACT debut at the Redemption pay-per-view in April, when she joined the commentary during a match between Kiera Hogan and Taya Valkyrie. At Slammiversary on July 22, Blanchard scored her first pay-per-view win, defeating former Knockouts Champion Allie.

IMPACT Wrestling is on the Road to Bound For Glory, which will be held October 14 in New York and air live on pay-per-view.