32 females from all around the world will be part of the second Mae Young Classic tournament which starts taping today. Here’s a look at all the 32 women in alphabetical order.

Aerial Monroe: A resident of Clearwater, Florida, she is a U.S. Air Force veteran. She’s relatively new as she only made her pro wrestling debut three years ago. She is married to Cruiserweight champion Cedric Alexander.

Ashley Rayne/Madison Rayne: The former five-time TNA Knockouts champion is a 13-year wrestling veteran and had a pretty eventful career at Impact Wrestling. In October last year, Rayne was part of a WWE Performance Center class and three weeks ago was at Slammiversary wrestling for the Knockouts title.

Allysin Kay: The artist formerly known as Sienna in Impact Wrestling is a 10-year ring veteran. Kay wrestled for Impact between 2016 and 2018 and is a former Knockouts champion. She has wrestled in Japan, Mexico, Europe, and in many independent circuits over the years. 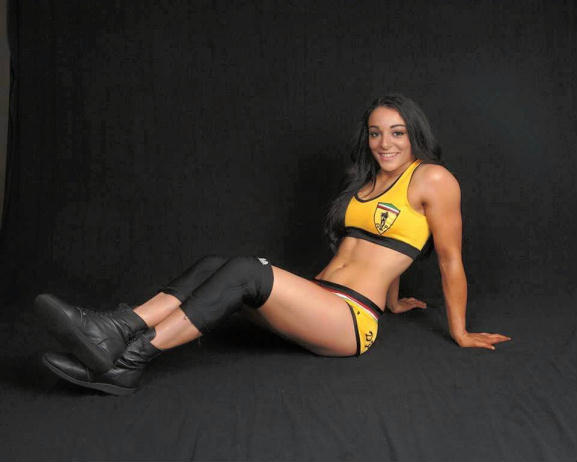 Deonna Purrazzo (pictured above): The New Jersey native has worked for Ring of Honor, Impact Wrestling, and World Wonder Ring Stardom in Japan. She also appeared in a couple of matches on NXT in 2015 and 2016 and was occasionally used as one of the Rosebuds when Adam Rose joined the main roster. Purrazzo also appeared on Smackdown last year in a segment with Alexa Bliss.

Hiroyo Matsumoto: The 32-year-old started her professional wrestling debut in 2006 and wrestled for Shimmer, World Wonder Ring Stardom, and NEO Ladies Pro Wrestling among others. She is a former tag team champion in both Shimmer and Stardom.

Io Shirai (pictured above): The Japanese sensation who just recently signed a WWE deal is looking to become the second Japanese to win this tournament following Kairi Sane last year. She is considered to be one of the best female wrestlers on the planet.

Isla Dawn: Signed to the WWE UK division, she was part of a triple threat match in June during the WWE UK Championship tournament.

Jessie Elaban: The 29-year-old from Austin, Texas, signed a WWE deal last year and has been training at the Performance Center ever since. She has frequently appeared on NXT.

Jinny: The Brit who was injured at the WWE UK Championship tournament fatal four-way match to determine the new #1 contender for the NXT Women’s title. She was taken out of the match but the PROGRESS Women’s champion is back and ready to take over the tournament. She wrestled at Axxess at this year’s WrestleMania weekend.

Kacy Catanzaro (pictured above): Best known for her time on America Ninja Warrior. She has been impressing NXT fans at non-televised live events lately with her fantastic athletic ability. She started training at the WWE Performance Center this year but the former Division I gymnast is already showing a lot of potential.

Kaitlyn: The 31-year-old joined WWE in 2010 and won season three of the old version of NXT. After a four-year stint with WWE which also included a 153-day reign as the Divas champion, Kaitlyn retired and started her own fitness apparel company titled Celestial Bodies.

Karen Q: Q is part of the Women of Honor division and was at the WWE Performance Center for a tryout last year. In 2015, she submitted her tape for Tough Enough but was not selected for the competition.

Kavita Devi: Her second appearance at the Mae Young Classic tournament. The Indian originally trained by The Great Khali has been training at the WWE Performance Center since January of this year and was part of the inaugural WrestleMania Women’s Battle Royal this year. 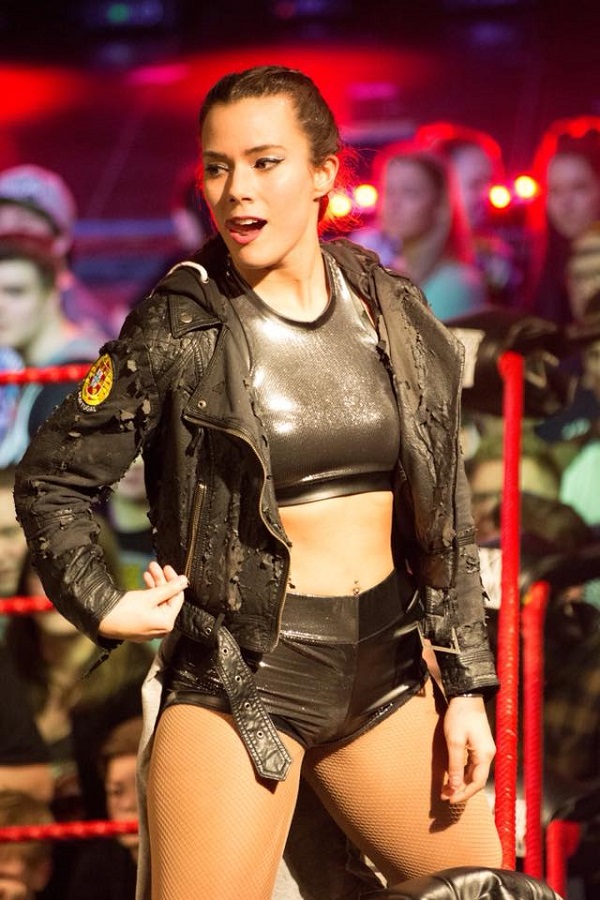 Killer Kelly (pictured above): She recently wrestled during the WWE United Kingdom Championship tournament at the Royal Albert Hall in a triple threat match. She is a former wXw women’s champion.

Lacey Lane: The 30-year-old is from Winter Park, Florida, the home of Full Sail University where the Mae Young Classic will be taped. She is one of the newest recruits of the WWE Performance Center and has trained at the Dudley Boyz’ wrestling school.

Meiko Satomura: The 38-year-old wrestles for the Sendai Girls’ Pro Wrestling promotion that she founded herself. She made her professional wrestling debut in 1995 at the age of 15. She previously wrestled for Gaea Japan and also makes appearances for Chikara.

Mercedes Martinez: Making her second appearance in the tournament after an impressive outing last year where she reached the semi finals and ultimately losing to Shayna Baszler.

Mia Yim: Also back for her second go in the tournament. Last year, Yim got eliminated in the round of 16 by Shayna Baszler and later in the year suffered a leg injury which kept her out of action for several months.

MJ Jenkins: Part of the latest WWE Performance Center recruit class. She signed a deal with WWE last month and was trained by the Dudley Boyz and Johnny Rodz.

Nicole Matthews: A Canadian 12-year wrestling veteran who has wrestled all over the world and already went one-on-one with many WWE women on the independent circuit. 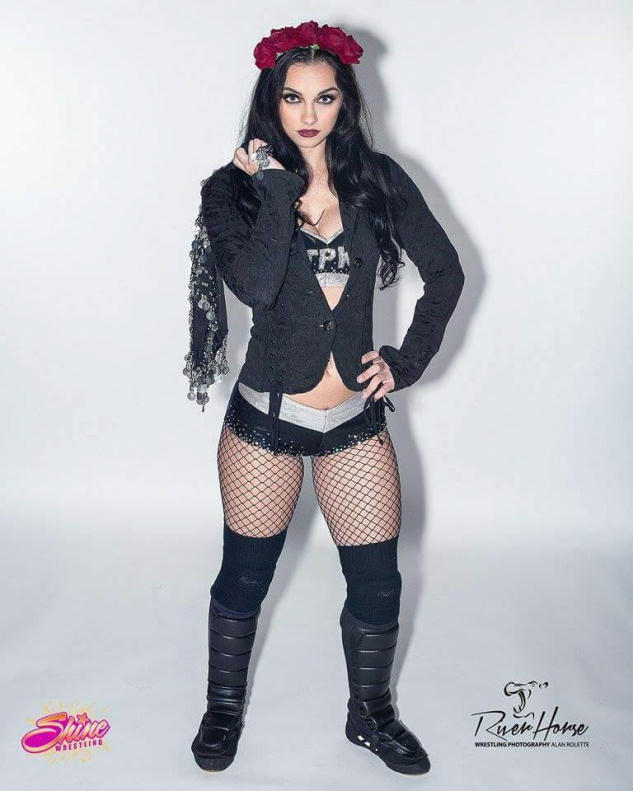 Priscilla Kelly (picture above): She is 21 years old from Georgia. Kelly is the first-ever Shine Nova champion, winning the title in July of last year and holding it until March 2018.

Rachel Evers: Also coming for her second Mae Young Classic tournament. Evers is the daughter of WWE Hall of Famer Paul Ellering and trained by Lance Storm. She lost to Abbey Laith in the second round last year.

Reina González: The 6-foot González participated in last year’s tournament and made it to the round of 16. She has been signed to a WWE deal since 2016.

Rhea Ripley: The Australian Ripley, who has also participated in the first Mae Young Classic tournament, has been signed to a WWE deal since last year. The 21-year-old lost to Dakota Kai in the round of 16 after defeating Miranda Salinas in the round of 32.

Taynara Conti: The 23-year-old Brazilian is also appearing in her second MYC. She was eliminated in the first round last year. Conti has been signed to a WWE deal since October 2016 and appears on NXT. She was also part of the WrestleMania Women’s Battle Royal this year.

Tegan Nox: Better known on the indie circuit as Nixon Newell, the 23-year-old from Wales has wrestled for PROGRESS Wrestling, Shimmer, Stardom, and What Culture Pro Wrestling. She is signed to a WWE developmental deal and missed last year’s tournament due to an injury.

Toni Storm: She signed a WWE UK deal this year. Storm went all the way to the semi finals last year and lost to the eventual winner Kairi Sane. She is 22 years old and was born in New Zealand but raised in Australia. Prior to signing a WWE deal, she wrestled for Progress Wrestling and Wold Wonder Ring Stardom.

Vanessa Kraven: She is a 6-foot, 195-pound wrestler from Montreal. She made her debut in 2004 and wrestled mostly on the independent circuit both in the United States and Japan. Also a former Shimmer Tag Team champion. 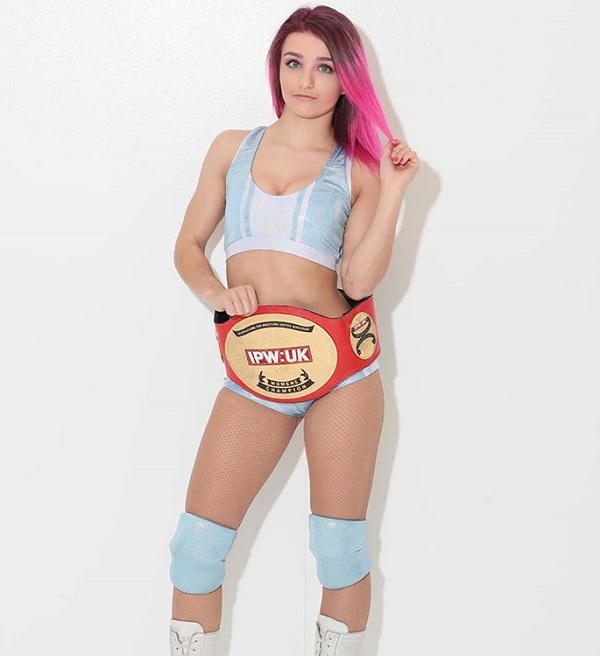 Xia Brookside (pictured above): The youngest of the tournament, just 19 years old. The Brit from Leicester is the stepdaughter of Robbie Brookside, one of the WWE Performance Center coaches.

Xia Li: The only Chinese wrestler in the Mae Young Classic and this will be her second appearance in the tournament, having lost to Mercedes Martinez in round one. She joined the WWE Performance Center in January of last year.

Zatara: Chilean-born wrestler with 10 years experience in the ring. She has mainly wrestled for Revolución Lucha Libre in Chile and has also worked in Mexico. She is 26 years old and wears a mask.

Zeuxis: The 29-year-old Puerto Rican wrestler will be making her WWE television debut in this tournament. She has mostly wrestled in Mexico throughout her 10-year career so far, mainly with CMLL.

WWE also previously announced that Crystal, a 24-year-old from the Philippines which was discovered by WWE during a scouting trip last year, was going to be in the tournament, however her name has been dropped and replaced by Kavita Devi.