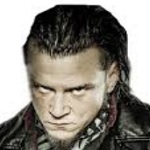 Sami Callihan steps into the ring at Slammiversary on Sunday, July 22, to face Pentagon Jr., in one of the most personal wars on the pay-per-view, originating from Toronto, Ontario, Canada.

Pentagon Jr. puts his legendary mask on the line, with a loss no doubt changing his lucha libre life for good. Callihan, meanwhile, puts his hair on the line – and he refuses to be shaved in the middle of the ring, even if the look has been rocked by Michael Jordan, George Foreman, Andre Agassi, Cal Ripken Jr., Kareem Abdul-Jabbar, Albert Pujols and Kelly Slater, among other sporting legends.

Callihan arrived in IMPACT Wrestling last November and has been causing chaos ever since. He’s thrown a fire-ball in Konnan’s face and smacked Eddie Edwards in the face with a baseball bat – and then refused to show any remorse to Edwards, among other heinous acts.

Callihan, arguably the most sadistic superstar on the IMPACT roster, is aligned with fellow Ohio natives Jake and Dave Crist. Sami has been wrestling since 2006 and has competed around the world, including Japan.