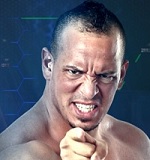 Thursday, June 14 … KM and Fallah Bahh will be the special guests.

Who know what words of wisdom KM might offer, as he is joined on the call by his “very close friend, Fallah,” as he said. Let’s just admit, the friendship between KM and Fallah Bahh is new and … intriguing, to say the least. They were rivals, with KM bullying and fat-shaming Fallah Bahh. But, KM felt bad and said he was sorry and offered to train Fallah.

Fallah even got a make-over – from KM.

On Impact! airing Thursday night, June 14, KM and Fallah join forces in the ring to challenge the team of Trevor Lee and Caleb Konley in tag team action.