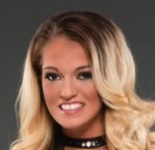 Alisha Edwards will be the special guest on the IMPACT Wrestling Media Teleconference.

Also on the Teleconference, Josh Mathews will be on the call for the first 10 minutes for a full recap of all things Canada, including the Impact! tapings that were held June 1-2 in Windsor, and the Slammiversary Press Conference, held June 4 in Toronto.

Alisha broke into wrestling in 2006 and has competed inside the IMPACT Wrestling ring against such legendary former Knockouts Champions as Madison Rayne, Angelina Love and Awesome Kong.

Alisha is, of course, the wife of Eddie Edwards who, Thursday night on Impact!, will face bitter rival Sami Callihan in an unsanctioned fight in the woods.

IMPACT Wrestling is officially on the Road to Slammiversary, which will be held July 22 in Toronto and air live on pay-per-view.