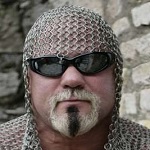 “Big Poppa Pump” Scott Steiner is live and uncensored, ready to answer media questions from anyone brave enough to even ask anything of the most powerful, feared wrestler in history!

Steiner returned to IMPACT on April 12, agreeing to team with Eli Drake at Redemption, live on pay-per-view on Sunday, April 22, in Orlando, Florida. Drake and Steiner will challenge LAX (Santana and Ortiz) for the Tag Team Championship belts.

Steiner has been a champion in every major promotion he has worked for, with a career that has been anchored on intimidation and fueled by hatred – for everyone.

Steiner, of course, was an NCAA Division I All-American at the University of Michigan, and has since shined for decades on the pro scene, crippling opponents and bashing egos along the way.

Steiner had only one requirement when he agreed with IMPACT Wrestling executives to participate in only his second-ever Teleconference. Steiner insisted: “There better not be any stupid $@#%& questions!!”