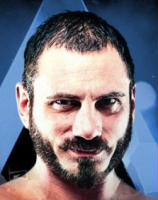 IMPACT World Champion Austin Aries puts the title on the line April 22 in the Redemption pay-per-view main event, originating from Orlando, Florida, against Pentagon Jr. and Fenix, both of Lucha Underground.

Aries will be the special guest on the weekly IMPACT Wrestling Media Teleconference.

So who will walk away with the IMPACT World Championship on April 22?

Aries returned to IMPACT on Feb. 1 and, in near-record time, reclaimed the World Championship, which he last held during the summer of 2012, with a win over then-Champion Eli Drake.

Aries will discuss his titles plus his legendary past in the company – he is a six-time and the longest-reigning X-Division Champion, and a one-time World Tag Team Champion (with Bobby Roode), among other honors, accolades and titles.

Aries also will talk about life as a vegan, as he is a noted author of a popular book on the subject.