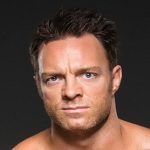 Drake will be the special guest on the weekly IMPACT Wrestling Media Teleconference.

Drake will be in New Orleans for WrestleCon for the much-anticipated IMPACT Wrestling battle against Lucha Underground, set to begin at 10pm ET at The Sugar Mill.

Eli Drake has plenty to discuss and never holds back in media interviews, especially with IMPACT closing in on Redemption, set for Sunday night, April 22 live on pay-per-view from Orlando, Florida.