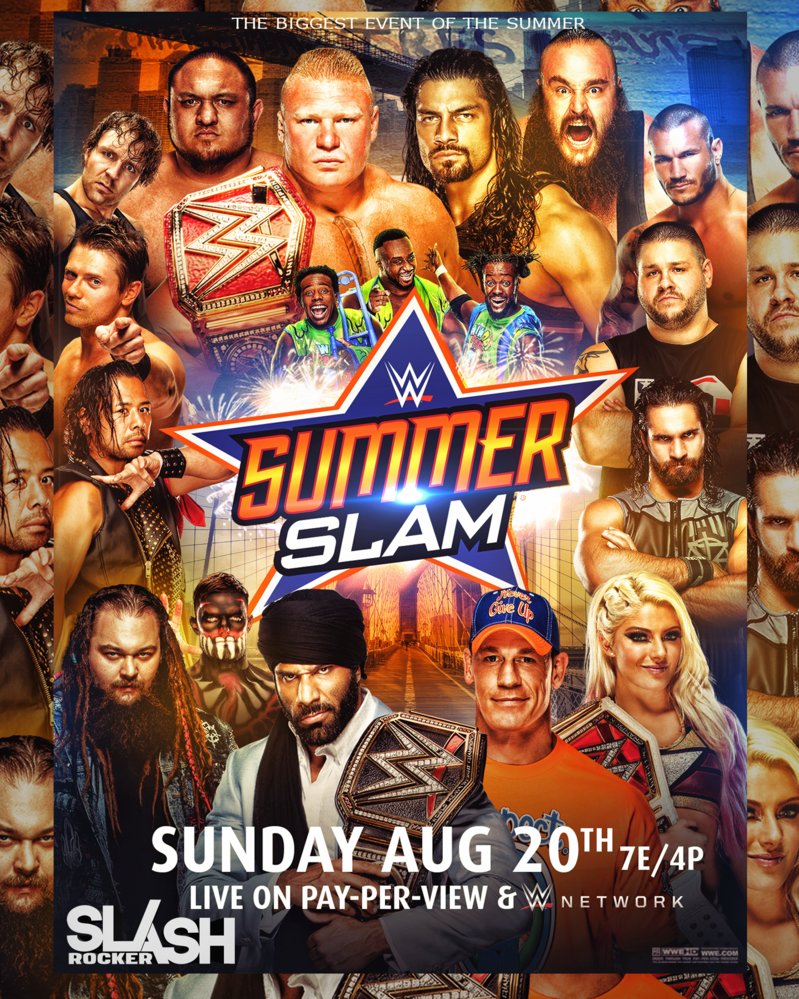 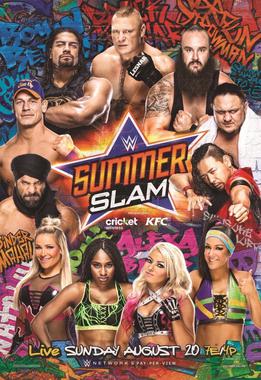 The SummerSlam Kickoff show kicks off with Renee Young, Jerry Lawler, Lita, and David Otunga welcoming us to the show. Charly Caruso is in the Social Media Lounge and she says she will be joined by Dean Ambrose and Seth Rollins later on tonight.

The panel hypes the WWE Network, and then we take a look back to Smackdown Live on Tuesday when Baron Corbin failed on his Money in the Bank cash-in against WWE Champion Jinder Mahal. Dasha Fuentes interviews Corbin backstage. He says he is not the champion because of John Cena. Corbin says he doesn’t regret cashing in, but Cena will regret costing him the match. Renee reminds us of one of the kickoff matches, The New Day vs. The Usos for the WWE Smackdown Tag Team Championship, as we head to a break.

Back from the break, we see the video hype package for the match between Finn Balor and Bray Wyatt. Otunga says he is really looking forward to this match and it will be awesome. Lita says Wyatt is intimidating, but there is nothing more insurmountable than the Demon that Finn Balor will bring tonight. Lawler says Wyatt’s sole purpose is to make people fear him, but Balor doesn’t fear anybody. Lawler, Lita, and Otunga all pick Balor to win. Renee brings up another Kickoff Show match, The Hardy Boyz and Jason Jordan vs. The Miztourage, as we head to a break.

Back from the break, we see the video hype package for the match between AJ Styles and Kevin Owens. We join Dasha and Shane McMahon backstage. McMahon says he is going to call it down the middle, but if something happens he will take matters into his own hands. Back at the panel, Lita says she believes McMahon will call it down the middle and Otunga agrees. Lawler says McMahon will end up being a big part of the outcome of the match. Lita says she wants Styles to win and Otunga picks Styles as well, while Lawler picks Owens. WWE Cruiserweight Championship Match: Akira Tozawa (c) (w/Titus O’Neil) vs. Neville
They lock up and Neville applies a side-headlock. Tozawa sends him off the ropes, but Neville drops him with a shoulder tackle. Neville dropkicks Tozawa down to the mat, but Tozawa comes back and dropkicks Neville out to the floor. Neville gets back into the ring, but Tozawa kicks him in the face. Tozawa beats down Neville in the corner. Neville comes back and sends Tozawa off the ropes, but Tozawa holds on as Neville goes for a dropkick. Tozawa connects with a senton, but Neville comes back and drapes Tozawa over the top rope. Neville slams Tozawa into the LED board as we head to a break.
We’re back and Neville takes Tozawa down with a dropkick in the ring. Neville connects with another dropkick and goes for the cover, but Tozawa kicks out at two. Neville stomps down onto Neville a few times and goes for the cover, but Tozawa kicks out at two. Neville drives a knee into Tozawa’s back and then applies a rear naked choke. Toazawa fights to his feet and sends Neville to the outside. Tozawa takes Neville out with a suicide dive and then connects with a few forearms in the corner. Tozawa kicks Neville in the midsection and then takes him down with a suplex. Tozawa charges at Neville again, but Neville puts him on the apron. Tozawa comes back into the ring, but Neville catches him. Tozawa turns it into an octopus submission and then rolls up Neville for a two count. Tozawa delivers a shining wizard and goes for the cover, but Neville kicks out at two again.
Tozawa goes up top, but Neville moves out of the way. Tozawa comes back and kicks Neville in the side of the head and comes off the ropes, but Neville takes him out with an enzuiguri. Tozawa stays on his feet and drops Neville with a kick to the face and both men are down. Neville grabs Tozawa and slams him down to the mat on his injured shoulder. Neville works over Tozawa’s shoulder, but Tozawa comes back with a straight right hand. Tozawa goes up top, but Neville cuts him off. Neville goes up top as well, but Tozawa fights him off and shoves him down to the mat. Tozawa goes for the senton, but Neville gets his knees up. Neville goes up top and connects with the Red Arrow and gets the pin fall.
Winner and new WWE Cruiserweight Champion: Neville.

We go back to the panel and Peter Rosenburg has replaced Lita. Rosenburg shows off his Bobby Heenan-esque jacket and Lawler makes fun of his for it. Renee tosses it back to Kayla Braxton, who is joined by Roman Reigns. Reigns says there is no reason to prepare for the match tonight because he was born ready. He says he doesn’t care who it is, he is whooping everybody’s ass and is walking out of Brooklyn as the Universal Champion.

We’re back from the break and Elias is in the ring. He cuts a promo on Brooklyn and begins to sing a song, but the crowd boos him mercilessly. He says he told them to hold their applause, so he is going to start over. He finishes his song and the lights go out, but he comes back for an encore.

We go back to the panel, but they are interrupted by Carmella and James Ellsworth. Carmella says nobody is talking about Natalya and Naomi because they are all talking about her. The panel does rapid fire for match picks. Carmella picks Big Cass, and doesn’t pick between Naomi and Natalya. Rosenburg asks for her preference and Carmella says Naomi because she would like to snatch the glow off of her. Lawler asks Ellsworth about Rosenburg’s jacket and he mocks Rosenburg. Carmella also doesn’t pick between Alexa Bliss and Sasha Banks, but she picks Rusev to beat Randy Orton. Rosenburg picks Orton. Renee asks Carmella when she is planning on cashin in and Carmella says she is not going to reveal anything but because of it she is the most powerful woman on the roster.

Back from the break, we see The Singh Brothers backstage and they introduce the WWE Champion, Jinder Mahal. Mahal says he has proven he is the best of the best and restored glory to the WWE Championship. He says the naysayers cheered when Baron Corbin tried to cash in, but he stripped them of their hope. He says he will do it again tonight when he defeats Shinsuke Nakamura. Mahal says Nakamura is not in his league and will fight for the 1.3 billion people of India again tonight. He then speaks to his people in his native language of Punjabi. Back to the panel, Lawler says there is more pressure on Mahal than Nakamura tonight. Rosenburg says this is an important night for both men and he loves the combination of both of them tonight. Otunga says Nakamura being in this arena for big shows before will be a benefit and it will be difficult for Mahal. Rosenburg asks if Nakamura will be ready for the Singh Brothers. Rosenburg and Lawler pick Mahal and Otunga goes with Nakamura. Back to the panel, they run down the other matches on the card: Naomi vs. Natalya, Big Show vs. Big Cass, Randy Orton vs. Rusev, Alexa Bliss vs. Sasha Banks, and John Cena vs. Baron Corbin. They then rundown the matches that they have already talked about earlier in the Kickoff Show.

We see a long KFC advertisement with Big Show, Mojo Rawley, Dolph Ziggler, Heath Slater, and Becky Lynch. We go back into the arena and Shawn Michaels’ musis hits. The Hearbreak Kid comes out dressed as Colonel Sanders.

We go back to the panel and they talk about the Fatal-Four Way for the Universal Championship. We see Paul Heyman backstage. He says it doesn’t matter who is in the ring tonight, Brock Lesnar will take them all on. Braun Strowman interferes and tells Heyman he talks to much and Heyman walks away in fear. Rosenburg says Heyman seems more nervous than he ever has before. Otunga says this is the most vulnerable position that Lesnar has been in. Lawler picks Lesnar to retains, Rosenburg picks Reigns, and Otunga picks Strowman as the Kickof Show comes to a close.