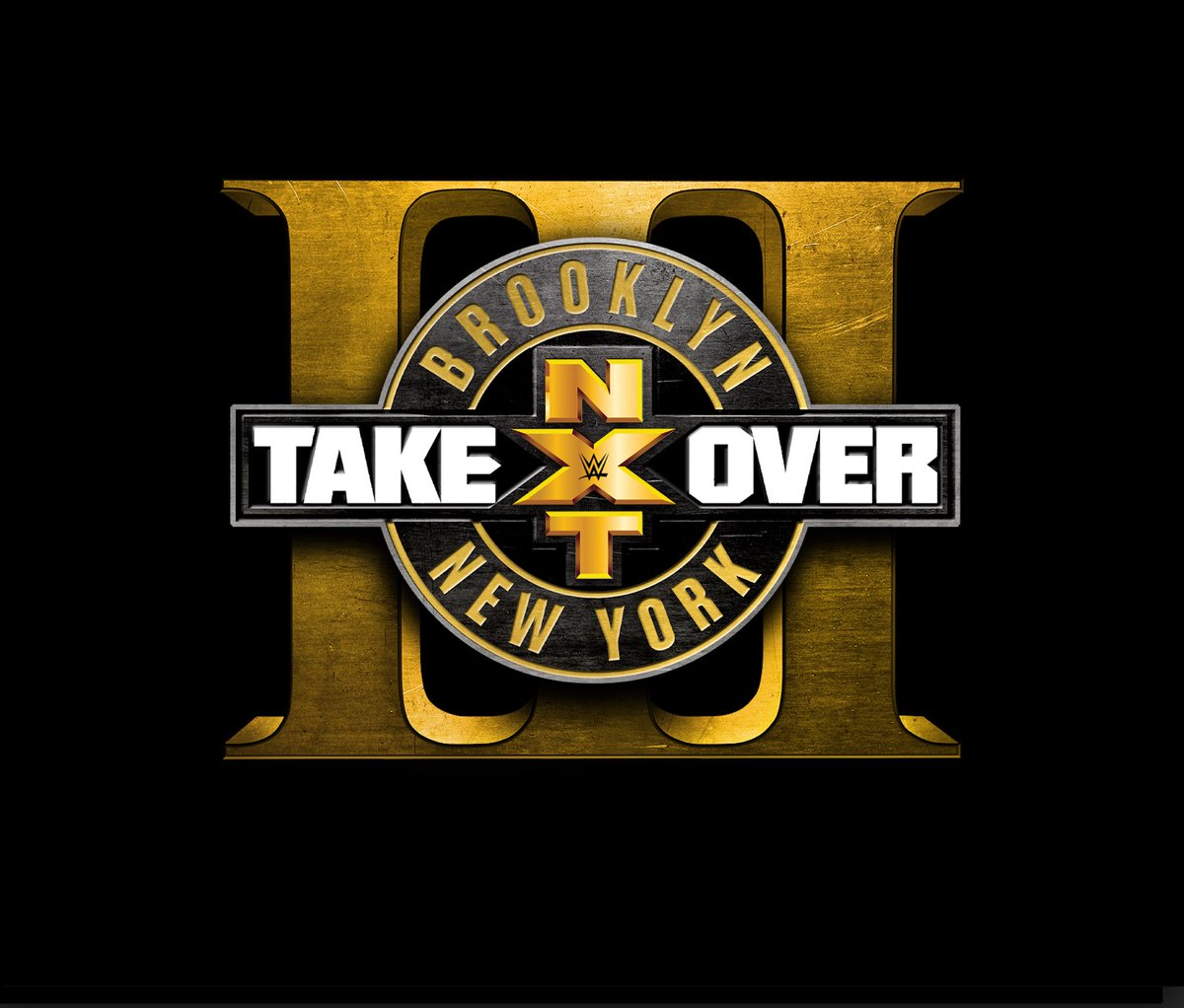 We head into the Barclays Center in Brooklyn, New York where Charly Caruso, Sam Roberts, Corey Graves, and Lita welcome us to the show. The panel talks about the past TakeOver events at Brooklyn and hypes up tonight’s show and runs down the card for the show. Graves says Hideo Itami and Aleister Black will steal the show, but Lita and Roberts say Asuka and Ember Moon will steal it. We head backstage and join Renee Young.

Renee says she got started in NXT and it feels great to be back. She welcomes Kurt Angle. He says this is his first time at an NXT show and he says the reason he is here will be kept close to himself, but he is excited to see Bobby Roode vs. Drew McIntyre and Asuka vs. Ember Moon. Graves says Angle is always doing what’s best for Raw and Lita says of course Angle is here scouting the talent. Graves wonders if Daniel Bryan will be here as well.

We take a look at the video hype package for the match between The Authors of Pain and SAnitY. Big E has joined the panel in place of Lita. We take a look back to 2013 when Big E defeated Seth Rollins to win the NXT Champion. Big E says being in FCW and NXT helped him learn so much to be ready for the main roster on Raw and Smackdown. Big E says SAnitY have been on a tear, but The Authors of Pain have run roughshod over everyone. He picks AOP to retain. He compares Paul Ellering to all of the classic bald villains in comic books. Roberts asks him if The New Day would rather defend the Smackdown Tag Team Championship against The Authors or SAnitY. He says The Authors because there would be less people.

We head backstage with Renee Young and she welcomes Shinsuke Nakamura. He says he loves the NXT vibes and he is back home. He says he is calm and ready for his match tomorrow. He says he agrees with Drew McIntyre about this being “our NXT.”

Neville has joined the panel now. Neville says he is a little bit predisposed right now and apologizes if he is not overly-thrilled to be in Brooklyn. He says he has been counting the hours and this is Christmas Eve for the King of the Cruiserweights. He says we can expect what he has done for the past months in 205 Live: domination. He says he can’t deny that NXT was a big part of his journey, but sometimes it is hard to look back at NXT without resentment. He says NXT built him for success, but he didn’t get that success when he first arrived on the main roster. Neville says he is proud of what he achieved in NXT, but but he is not done yet. Graves asks Neville about Aleister Black and Hideo Itami. He says he knows both very well and looks forward to seeing them kick each others heads off. He says Itami needs to embrace his new emotion and use it to his advantage. Neville says Itami needs to look out for Black’s striking abilities like he did when he defeated Black back in January. Talk then turns to the match between Johnny Gargano and Andrade “Cien” Almas. Neville says he sees Gargano attempting to bounce back after a betrayal from a tag team partner and he knows how that feels. Neville tells Gargano to not trust anyone.

We see footage from earlier today showing Ember Moon and Asuka arriving to the arena as we head to a break.

We’re back from the break and we see the video hype package for the match between Asuka and Ember Moon. Lita rejoin the panel, and Carmella and Sasha Banks have joined. Sasha says it’s great to be back and says she and Bayley tore the house down at the first TakeOver Brooklyn. Carmella says she has never been on a TakeOver and jokes that Asuka should watch her back. She says she learned so much in NXT and can’t wait to see what happens. Carmella says everyone wants to be the one woman to take down Asuka. Sasha says the only reason Asuka is undefeated is because they weren’t in NXT at the same time. Sasha picks Asuka to win and Carmella picks Ember. They talk about the upcoming Mae Young Classic and Lita says it was a privilege to call those matches and it will live up to the hype. Carmella says it’s just a great experience to be a part of the Women’s Revolution. Lita reveals that the Mae Young Classic Bracketology will take place tomorrow night after SummerSlam.

We head backstage with Renee Young, who is with Becky Lynch and Bayley. Becky says it’s amazing to be back and it’s amazing to see how far NXT has come. Bayley says being back in very special to be back because of her matches in the Barclays Center. Bayley says her shoulder is healing and she has a follow up in about a month and will know more after that. Becky says Asuka has been so dominant but Ember might take her tonight. Bayley says Asuka kicked her out of NXT and wants to see her continue the streak.

We see the video hype package for the match between Bobby Roode and Drew McIntyre. Baron Corbin has joined the briefcase. He calls the fans dumb for chanting “Where’s your briefcase?” at him. He says being involved in the first TakeOver Brooklyn was an amazing experience. Corbin says he was never in a wrestling ring before walking into NXT and NXT gave him every tool necessary to succeed. He says he came to NXT with a purpose and it worked out for him. Corbin says he owes John Cena a beating, but having that match is a testament to the grind and all the time in NXT. Corbin picks Bobby Roode to win tonight because of his confidence. Graves also picks Roode, while Roberts picks McIntyre as the preshow comes to a close.

The show kicks off with Code Orange performing “Bleeding in the Blur” live as we see the video hype package for the show. Afterward, Mauro Ranallo, Nigel McGuinness, and Percy Watson welcome us to the show. We see Kurt Angle, Daniel Bryan, and various NXT Superstars watching the show from a skybox.

We see Drew McIntyre gearing up for his match backstage.

We see the video hype package for the match between The Authors of Pain and SAnitY. Corey Graves joins the commentary team for this match.

A brawl breaks out before the match and AOP get the advantage and send Wolfe and Dain to the outside. Wolfe and Dain pull AOP out and Eric Young grabs a table from under the ring. AOP and Wolfe and Dain continue to battle on the floor and then Akam tosses Wolfe into the ring to begin the match. Akam tosses Wolfe across the ring and tags in Rezar. AOP double-team Wolfe for a bit and then Rezar beats him down with some forearm shots. Akam tags back in and keeps Wolfe grounded. Akam sends Wolfe to the corner and charges, but Wolfe rolls out of the way. Eric Young gets on the apron and replaces Dain on the apron. Young tags in, but gets taken to the outside. Akam clotheslines Young into the crowd and Rezar battles with Wolfe. Rezar and Wolfe get into the ring as Young and Akam battle in the crowd. Akam slams Young into the barricade and charges, but Young moves and Akam slams into the barricade. Akam comes back and tosses Young back to ringside and then back into the ring.
Young connects with a right hand, but Rezar tags in and Akam tosses Young into Rezar, who slams him down to the mat. Rezar beats Young down and then tags Akam back in. Akam stomps away on Young and goes for the cover, but Young kicks out. Rezar tags back in and keeps Young grounded with a rear naked choke. Young tries to fight out, but Rezar keeps the choke applied. Young fights to his feet and connects with back elbows. Rezar backs Young into the corner and sends him to the apron. Young delivers a shoulder shot and comes back into the ring, but Rezar picks him up and slams him right back down. Rezar goes for an elbow drop, but Young rolls out of the way. Rezar charges, but Young moves and Rezar hits the turnbuckles. Wolfe tags in and he delivers a boot to Akam. Wolfe drops Rezar with a few forearm shots and then delivers a big boot to the face.
Wolfe takes Akam down with an exploder suplex and then delivers a German suplex to Rezar. Wolfe goes up top and clotheslines Rezar from the top. Wolfe goes for the cover, but Akam breaks it up. Akam sends Young to the floor and then AOP double team Wolfe. They drop him with a neck-breaker power bomb and Akam goes for the cover, but Wolfe kicks out at two. Rezar tags in and goes up top and Akam hands Wolfe to him. Wolfe counters with a Frankensteiner and sends Akam to the outside. Young tags in and drops Rezar with a neck-breaker. Young goes up top, but Rezar hits the ropes and Young crotches the top turnbuckle. Rezar climbs as well and tries to suplex Young down to the mat, but Nikki Cross holds onto Young as Akam accidentally suplexes Rezar. Young connects with an elbow drop to Rezar and goes for the cover, but Akam pulls Rezar out of the ring.
Young takes Akam out with a tope suicida and Wolfe takes Rezar out as well. Ellering and Nikki get into the ring and the referee holds them apart. Nikki gets around and dives onto Akam. Akam catches her, but Killian Dain cross-bodies Akam and Nikki through a table on the outside. Young tosses Rezar back into the ring and tags in Wolfe. Wolfe and Young double-team Rezar and drop him with a suplex/elbow drop combo and Wolfe gets the pin fall.
Winners and new NXT Tag Team Champions: SAnitY. (12:00)
After the match, Bobby Fish and Kyle O’Reilly attack AOP and SAnitY and beat down everyone.

We see Neville sitting at ringside, as well as Shinsuke Nakamura and Kalisto.

We see Bobby Roode getting ready for his match backstage. Jim Ross has joined the commentary team for this match.

We see Sasha Banks, Bayley, and Becky Lynch sitting at ringside and then we see Asuka warming up for her match backstage. We then see Ember Moon walking backstage.

We see the video hype package for the match between Asuka and Ember Moon. We see Kevin Owens and Samoa Joe at ringside and then see the video hype package for the match between Bobby Roode and Drew McIntyre.