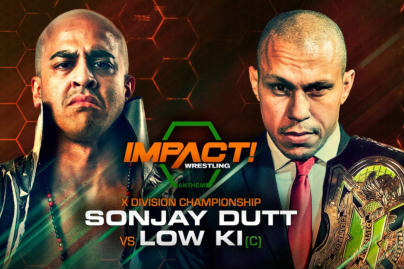 Three of the top X-Division stars will participate in the first-ever X-Division Media Teleconference.

The trio will discuss Destination-X on Thursday night, August 17, and everything else that has long made the X-Division the cornerstone of the company.

Here is the pertinent information:

Destination-X on Thursday, August 17, including the Ladder Match, Dutt vs. Lee;
The X-Division Championship Belt – winning the title vs. stealing the title;
High-flying, death-defying moves;
Best move: Reverse Warrior’s Way (Dutt) or the original Warrior’s Way (Low-Ki);
Who is the best-ever X-Division competitor;
Super-X Cup;
Tougher match – Ultimate-X or Ladder Match;
How has the style of the X-Division influenced wrestling promotions around the world;
Hair tips from Trevor;
Sonjay winning the title in his native India, including his family’s reaction; and
What makes Low-Ki smile.

Trevor Lee, now in possession of the X-Division Championship belt.