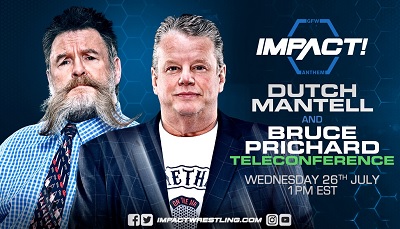 Two Global Force Wrestling (GFW) personalities who, combined, have more than 75 years of experience in professional wrestling will come together for a behind-the-scenes look at the industry. Bruce Prichard and Dutch Mantel will be on the weekly GFW Media Teleconference, starting at 1pm ET on Wednesday, July 26.

Bruce Prichard arrived in GFW in late-2010, and worked primarily behind-the-camera for about three years. He returned to GFW this past March. Prichard spent decades working for the WWE, and who can forget Brother Love?! Bruce started in wrestling at age … 10. Yes, when he was 10 years-old, he was selling wrestling posters in Houston, Texas.

Dutch Mantel has been a wrestling fixture since the regional territory days of the 1970s. His career has included time with WWF, when it was the WWF, and now WWE, plus WCW, among other promotions. He made his GFW debut behind-the-scenes in 2003, and since early this year has been a Creative Consultant. Dutch proudly served in the U.S. Army and was awarded the Vietnam Service Medal.

Plus, the weekly GFW Teleconference will include exclusive “Hot News” you won’t want to miss.

Topics To Discuss In The Teleconference:

· How wrestling has changed over the years;

· Where wrestling is headed;

· Who are the all-time most impactful wrestlers;

· What it takes to star in wrestling;

· Funniest in-ring moments that fans might not have noticed or known;

· The GFW roster; and

· The most memorable in-ring moment for each.