We head into the Royal Farms Arena in Baltimore, Maryland where Renee Young, Sam Roberts, and David Otunga welcome us to the show. Renee tosses it back yo Charly Caruso in the Social Media Lounge, and she informs us that her guests tonight will be The Hardy Boyz. We take a look at the video hype package for the match between Dean Ambrose and The Miz. Renee asks if Ambrose has to change his style tonight because he could get disqualified and lose the title. Otunga says Miz has found away to shift the rules into his favor and will do whatever it takes to make Ambrose get disqualified. Roberts says Miz will strategically put things in place to make sure he leaves with the title. Renee asks if Ambrose has been a good representative of the Intercontinental Championship. Roberts says we will find out the answer to that question tonight depending on how Ambrose reacts during the match. Renee brings up Maryse an Otunga says Miz relies on her a lot to get things done. Renee asks them who they think will win, but Roberts turns it back on her. Renee picks Ambrose, obviously. Otunga asks her if Ambrose can keep it in line tonight, and she says he is a professional and can. Otunga says he wants to see Ambrose go crazy on Miz tonight and Roberts picks Miz to win.

We take a look at the video hype package for the match between Alexa Bliss and Bayley. Nia Jax has joined the panel. She says she and Alexa are best friends and she has all the faith in the world in Alexa tonight. Otunga asks her what it would take for Bayley to win. Nia says it would take a miracle and she doesn’t think Bayley has the “extreme-ness” in her. Roberts asks if it was a mistake for Alexa to try to get Bayley to go extreme. Nia asks if he is kidding and scoffs at his question. Nia mocks Bayley’s childhood fandom and says again that Bayley doesn’t have it in her to get it done tonight. Roberts asks if Alexa might have taken it too far this past Monday night, but Nia says it gave Alexa a psychological advantage. Nia says we know Alexa knows how to handle a kendo stick, but we’ve never seen Bayley handle anything like it and it outclassed by Alexa. Roberts asks if Bayley has to worry about Nia getting involved tonight, but she says she doesn’t like his tone and he is lucky that she won’t jump over the title and “snatch him bald.” Nia says she is confident that Alexa will win and she has a direct shot at the title and no one will ever want to face her for the title once she wins it. Otunga says Bayley doesn’t have the killer instinct and Roberts says this match is the time for Bayley to get it.

We head to the Social Media Lounge with Charly Caruso and The Hardy Boyz. They are asked what made them come back to the WWE. Matt says the time was right and they wanted to finish their careers in WWE. Jeff says he promised he would be back when he left in 2009. They are asked why they chose the steel cage stipulation. Matt says this is Cesaro and Sheamus’ last opportunity and Jeff says he loves cage matches and teases a big Swanton Bomb. They are asked if they have a message for Cesaro and Sheamus. Jeff says it is their last chance and Matt says they are ending it tonight. Otunga says it sounds like the Hardy Boyz have a plan tonight. Roberts he keeps getting asked have the Hardyz won every match since they’ve been back and tonight could be the night they lose. Roberts picks Sheamus and Cesaro to win and Otunga goes with The Hardy Boyz. 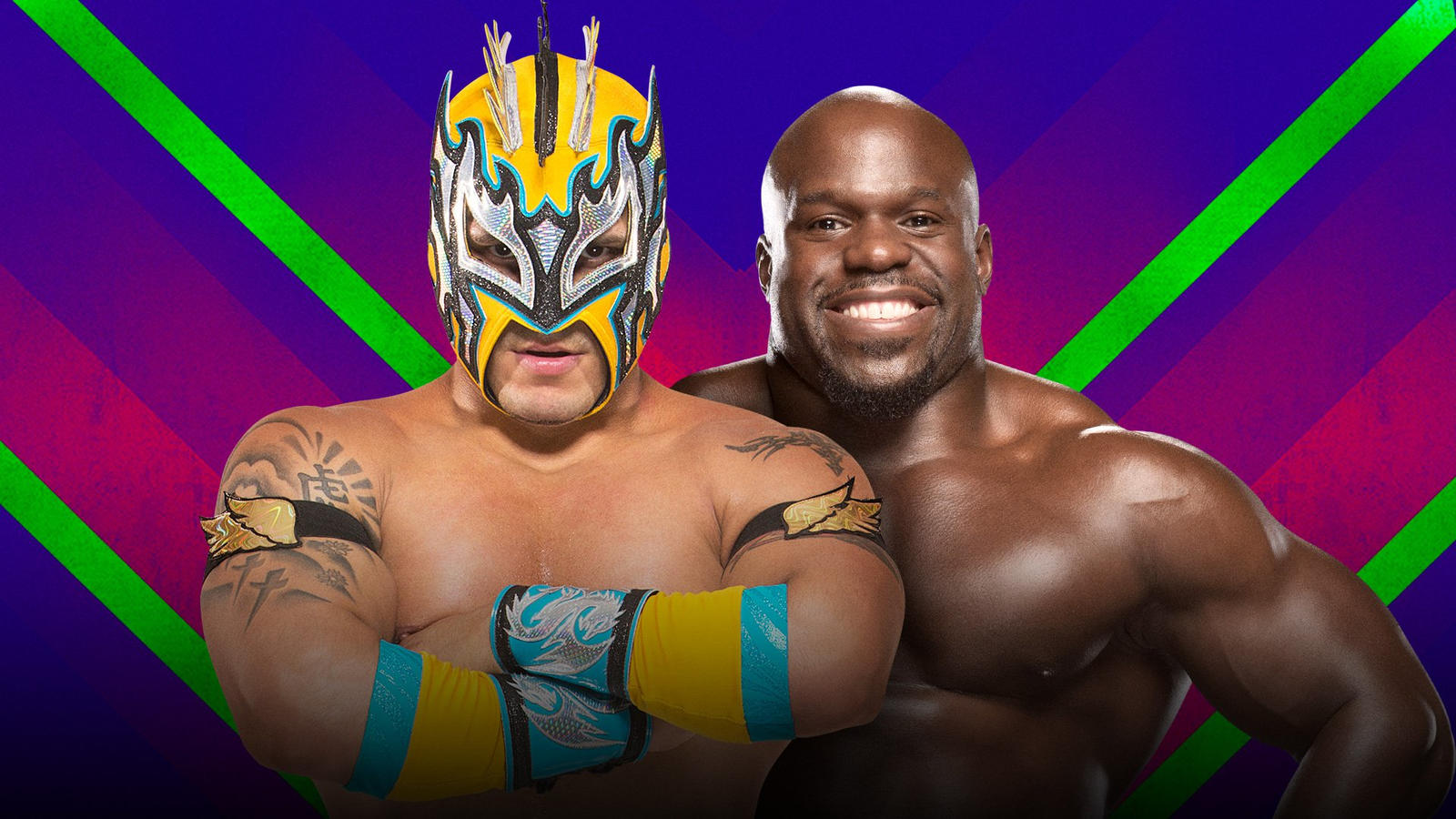 We see the video hype package for the match between Roman Reigns, Seth Rollins, Samoa Joe, Finn Balor, and Bray Wyatt. Kurt Angle has joined the panel. He says the top five Raw Superstars will go out and prove why they deserve to face Brock Lesnar for the Universal Championship. He says risks have to be taken and any Superstar wants to lay claim to the number one contendership. He says these guys will settle it in the ring and the winner will prove that he deserves to be the number one contender. Angle says he is the most dominant force that he has ever faced and the only way to beat him is to wear him down. Angle hype up all five men and says Rollins is one of the best in the business and Samoa Joe is hungry for a title. Otunga picks Bray Wyatt to win, Angle picks Joe, and Roberts picks Rollins as the kickoff show comes to a close.

We see the opening video for Extreme Rules and then go live into the Royal Farms Arena in Baltimore, Maryland where Michael Cole, Booker T, and Corey Graves welcome us to the show. WWE Intercontinental Championship Match: Dean Ambrose (c) vs. The Miz (w/Maryse) – If Ambrose is disqualified, he loses the title

We see the vignette for the Money in the Bank Smackdown-exclusive pay-per-view, which is two weeks from tonight on June 18th.

We see Charly Caruso and Bayley backstage. Bayley says Alexa Bliss says a lot of things, but she doesn’t know her. Bayley says she asked for this match because she is ready. She says she has watched a lot of Tommy Dreamer, Sandman, and Steve Blackman, and she even saw Wonder Woman, which inspired her. She says she is willing to do whatever it takes to get back at Alexa and regain the Raw Women’s Championship. Mixed Tag Team Match: Sasha Banks and Rich Swann vs. Noam Dar and Alicia Fox
Banks and Fox start the match, but Fox backs into the corner and tags in Dar. Swann gets into the ring and backs Dar into the corner. Swann slams Dar into the turnbuckle and then delivers a chop. Dar comes right back and takes Swann down to the mat. Dar kicks Swann in the face and goes up top, but Swann takes him down to the mat quickly. Swann goes up top, but Dar runs to the corner and tags in Fox. Banks gets into the ring and brawls with Fox. Banks kicks Fox in the face and then locks in a cross-face down on the mat. Dar pulls Fox to the ropes to break the hold. Fox kicks Banks in the face and goes for the cover, but Banks kicks out at two. Fox mocks Swann and then slams Banks face first into the mat. Fox chokes Banks over the middle rope and then delivers a back-breaker. Fox goes for the cover, but Banks kicks out at two. Fox sends Banks into the corner, but Banks counters with a back elbow. Fox goes for another kick, but Banks ducks under and tags Swann. Dar gets into the ring and Swann takes him down with a hurricanrana. Swann kicks Dar in the back of the neck and goes for the cover, but Dar kicks out at two. Dar comes back with a roll-up, but Swann kicks out. They exchange right hands and Swann gets a back-slide. Dar rolls free and delivers an uppercut. Dar runs the ropes, but Swann counters with a kick to the face. Banks and Fox get into the ring and brawl to the floor. Banks backs Fox into the ring apron and Dar slams Swann into the barricade. Banks comes off the top rope and takes Dar out with double knees. Swann tosses Dar back into the ring and connects with the Phoenix Splash and gets the pin fall.
Winners: Rich Swann and Sasha Banks.

Elias Samson is in the ring and begins singing a song for us.

We see the video hype package for the match between Alexa Bliss and Bayley. Bliss tells Bayley to go ahead and climb to get the kendo stick, but Bliss pulls her down by the hair. Bayley comes back and slams Bliss into the turnbuckle and then delivers a scoop slam. Bayley goes for the cover, but Bliss kicks out at two. Bayley goes to climb, but Bliss pulls her down and delivers a right hand. Bliss climbs, but Bayley meets her and they brawl on the top rope. Bayley pulls the kendo stick down and both women fall to the floor. They both try to get the kendo stick in the ring, but brawl to the floor again. Bayley backs Alexa into the barricade and then delivers a belly-to-back suplex on the outside. Bayley gets back into the ring and grabs the kendo stick. She holds it up as Alexa looks on from the floor. Bayley chases Bliss around the ring and then back into the ring. Bayley thinks about it too much and Bliss takes her down. Bliss grabs the kendo stick and beats Bayley down with it. Bliss goes for a big swing, but Bayley counters with Bayley-to-Belly. Bayley shoves Bliss away from the kendo stick, but Bliss comes right back and slams Bayley into the stick in the corner. Bliss grabs the stick and hits Bayley with it and then drops Bayley with a DDT and gets the pin fall.
Winner and still WWE Raw Women’s Champion: Alexa Bliss. We see the video hype package for the match between Neville and Austin Aries. We see the vignette for the next Raw pay-per-view, Great Balls of Fire, which is on Sunday, July 9th.

We see the video hype package for the Fatal 5-Way Extreme Rules Match.