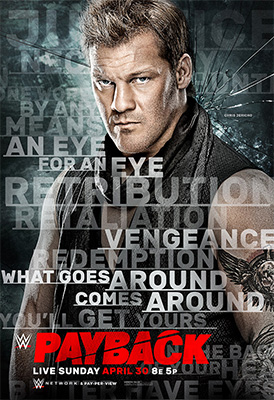 WWE Payback Kickoff kicks off with Renee Young, Jerry Lawler, and Sam Roberts welcoming us to the show. The panels talks about the House of Horrors Match between Randy Orton and Bray Wyatt. Roberts says no one knows what to expect tonight, and Lawler agrees with him. We join Charly Caruso backstage in the Social Media Lounge, and she informs us that her guests later tonight will be Dublin-07, Sheamus and Cesaro. The panel then plugs the WWE Network and then talk about the match between Kevin Owens and Chris Jericho for the WWE United States Championship. Roberts says Jericho has a lot to lose tonight, but Renee says Owens has a lot more to lose. Lawler says Jericho has a lot of hate for Owens and will get the job done tonight. Roberts disagrees and picks Owens.

We are reminded that Enzo Amore and Big Cass will take on Luke Gallows and Karl Anderson on the kickoff show, as well as The Miz hosting an edition of Miz TV with his guest being Finn Balor.

Sasha Banks has joined the panel to talk about the match between Bayley and Alexa Bliss. Sasha says she loves the new competition on Raw and tells them to bring it on. She says she beat Alexa Bliss last week and mocks Alexa for running away from the match while being number one contender. Sasha says it’s good for her that she has the opportunity tonight, but Bayley will walk out as the champion. Roberts asks Sasha if it benefits her to have Bayley as the champion. Sasha gets offended and says she will always have Bayley’s back if she needs help. Lawler says Alexa told him earlier that nothing is going to stop her and Sasha tells him to wait and see. Sasha picks Bayley, as does Roberts, while Lawler picks Alexa.

We see the video hype package for the feud between Seth Rollins and Samoa Joe. Roberts says Rollins has to maintain his momentum from WrestleMania 33 tonight. Lawler says Joe knows how to work on the weak points of his opponents and he will stop at nothing to exploit Rollins’ weaknesses. Lawler says Joe has his walking orders from Triple H and better not fail. Roberts says if Rollins doesn’t win tonight, it takes away from his WrestleMania win. Roberts and Lawler both pick Rollins to win. Enzo Amore and Big Cass vs. Luke Gallows and Karl Anderson
Amore and Anderson start the match for their teams. Amore gets control and backs Anderson into the corner. Amore goes to drive his shoulder into Anderson’s midsection, but Anderson counters with a knee shot. Anderson tags in Gallows and Gallows chokes Amore over the middle rope. Anderson tags back in and continues to work over Amore. Amore tries to get free, but Gallows tags in and works over Amore’s injured shoulder as we head to a break.
We’re back and Gallows is still in control of Amore. Amore fights back with right hands to the midsection and then drops Gallows with a DDT. Anderson tags in and stops Amore from tagging in Cass. Anderson tosses Amore back into the ring and charges at him in the corner. Amore counters with a boot to the face and goes to tag Cass, but Gallows pulls Cass to the floor. Anderson plants Amore and goes for the cover, but Amore kicks out at two. Gallows tags back in and goes to suplex Amore. Amore flips over and tags in Cass. Cass drops Gallows with a shoulder tackle and clotheslines Anderson to the floor. Cass takes Gallows down with a scoop slam and then delivers the Empire Elbow. Cass takes Gallows to the corner and splashes him. He does it again and goes for it a third time, but Anderson pulls Gallows out of the way. Gallows kicks Cass in the face and Anderson knocks Amore down to the floor after Amore tagged in. Anderson tosses Amore back into the ring and tags in Gallows. They set Amore up for the Magic Killer, but Cass delivers a big boot to Anderson. Amore rolls up Gallows and gets the pin fall.
Winners: Enzo Amore and Big Cass.

We see The Hardy Boyz backstage. Matt is talking strategy to Jeff when Goldust and R-Truth walk up. Goldust says he is going to talk to Kurt Angle about challenging the winners of the WWE Raw Tag Team Championship match. R-Truth says he hopes it is the Hardys and Matt says that he hopes they can wrestle them because they are entertaining. We see Dublin-07 getting ready for the Social Media Lounge backstage as we head to a break.

We head backstage with Charly Caruso, Sheamus, and Cesaro. They are asked their strategy for tonight. Cesaro says winning is their strategy. Sheamus says they don’t really have a plan and they will just go out there and do what they do week after week. They are asked which one of them is the better athlete and Cesaro corrects the spelling of “Sheasaro” without actually answering the question. Sheamus says they are always competing against each other, but they are a team, and he is the better athlete. Cesaro rolls his eyes and they push each other to get better every day and it’s good to know that Sheamus looks up to him every day. We join the panel and Lawler and Roberts pick The Hardy Boyz to retain, while Renee picks Dublin-07.

We see the video hype package for the feud between Bray Wyatt and Randy Orton. We are informed that the match will be no holds barred, will start in Bray Wyatt’s house, and end in the ring with a pin fall or submission. Miz TV: Special Guest – Finn Balor
The Miz mocks the fans for cheering for Balor’s “five-minute entrance,” and then asks what “this” is and points as the crowd. Balor says, “This is Balor Club,” and the crowd erupts. Miz asks if he and Maryse can be in the Balor Club. Balor asks the fans and they boo Miz but cheer Maryse. Balor says no. Miz says wherever Balor went, he became a champion and a star. Miz asks if Balor feels like a failure with how everything panned out. Balor says only if a failure tears every tendon in his arm, still finishes the match, and becomes the first ever WWE Universal Champion. Miz says Balor was only champion for 24 hours, so yes, Balor is a failure. Miz says Balor is too small and fights with his heart rather than his brain. Miz says he was on Smackdown Live with the Intercontinental Championship and making must-see TV. Miz asks what’s next for Balor. Balor says he is going to get his title back. Miz asks Balor if he knows who the Universal Champion is, and Balor says he does. Miz says Brock Lesnar will break Balor in half. Miz says he would even wipe the floor with Balor. Balor says there is another club that Miz can join: the Finn Balor Just Kicked My Ass Club. Miz hides behind Maryse. Balor says he is going to be the bigger man tonight and says Miz isn’t worth it. Miz says Balor is afraid of him, but Balor comes back and takes Miz down with the Slingblade. Balor dropkicks Miz into the corner. Balor’s music hits as Miz rolls out of the ring.

We rejoin the panel and they talk about what we just saw on Miz TV. They then talk about the feud between Roman Reigns and Braun Strowman. They run down the card for Payback as the kickoff show comes to a close.