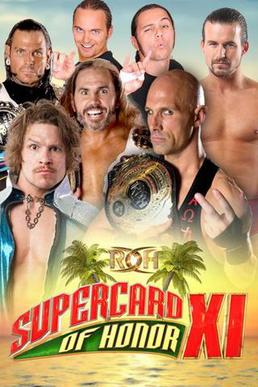 They start off pretty hot, doing some great back and forth. They were brawling around the ring when Cole tried to attack Scurll with his own umbrella, but Scurll responded by grabbing the television title and they had a stand-off. Cole tried to superkick Scurll in response, but Scurll put Cole’s leg on the apron and laid him out on the outside.

Cole fires back and hits the Last Shot, but Scurll kicks out. They trade a series of spots where they try faking out one another until Scurll lays out Cole with a brainbuster. Cole goes to do his pose, but Scurll grabs Cole by the finger and snaps it in a cool spot. They go back and forth until Cole lands a package piledriver, only for Scurll to once again kick out. Scurll with a umbrella shot AND a piledriver, but Cole kicks out.

Cole plants Scurll with a tombstone, then tries for another, but starts selling his back. Scurll takes advantage by snapping a few more fingers, plants Cole with a Gotch piledriver then submits Cole with the chickenwing in a really great opener. Scurll is really good and Cole is great as being a heel and having command of a match.

This brings out Silas Young, who says Taven has nothing but whiny ass excuses. He says TK snapped under the pressure and it was him who needed his help, not the other way around. Vinny was the one pinned in the match, not me, and he’d rather have his fists do the talking now. Beer City Bruiser spits beer in Vinny’s face and it’s on.

They brawl around the outside to start. Vinny Marseglia takes out Bruiser with a corkscrew off the apron. Taven takes out Bruiser but Young comes back and they trade some exchanges. Bruiser and Taven somehow come back with dual frog splashes but both of their opponents kick out. Bruiser takes out Taven with a cannonball. Bruiser is way more agile than he looks.

Marseglia, meanwhile, has a cigar and starts smoking it. He tried to put it out on Silas but he counters with Misery and covers Marseglia, cigar now in his mouth for the win. Fun, fast paced match while it lasted.

Tama Tonga and Mark Briscoe started things off, looking pretty good against one another. A lot of quick tags between both teams early. Bully Ray is tagged in and goes to shake the hand of the Guerillas of Destiny, but GoD jumps him as they both work him over. Page comes in, but Bully lays them all out and wipes them out with a crossbody.

Bully motions for the Briscoes to get the tables, but Tama Tonga lays them out on the outside. Bully Ray and Hangman Page battle it out. Everyone comes back in and starts hitting crazy moves to drive everyone out of the ring. Hangman Page did, in fact, buts out the shooting star shoulder block. They faces lay out the heels with the double doomsday device, then Jay Briscoe pins Roa with the assisted 3D for the win. Another fast paced, fun match to watch with some really cool spots.

Both men are out wearing jeans an a t-shirt, with Cody wearing a “Lethal Sucks Eggs” t-shirt.

A lot of stomping and kicking between both men starts things off. Lethal rips up Cody’s shirt early, so much for that. Lethal grabs the rope and pulls Cody into the turnbuckle, ringing the bell and busting Cody open. Lethal uses the bell to dig into Cody’s wound, even wrapping him around the ring roes to really get it in.

Lethal goes for the Lethal Injection, but Cody counters and uses the bell to target Lethal’s leg. Cody looks for something under the ring. After finding his old face mask, he instead opts to use the table. Lethal fights back, but Cody lays him out and wraps him in the figure four leglock. Lethal grabs the cowbell and smacks Cody with it to free him.

Lethal goes to the top rope, but Cody immediately gets up and throws him into the table on the outside. He soon follows with the crossroads but Lethal kicks out. He next tries for a superplex, but Lethal fights him off and sends him to the floor. He lands the elbow but Cody uses the cowbell to absorb the blow. Cody tries for the beautiful disaster but Lethal cuts him off with a cutter then follows it with the Lethal Injection for the win.

Really liked this match. They did some cool old school stuff and incorporated it into a modern wrestling match and that worked out really well.

Cody gets up after the match and grabs the bullrope. Lethal enters the ring and extends his hand. Cody pauses, then gives him what they billed as the Rhodes family heirloom (the bullrope) as they both make their exit.

During the intermission, they aired footage from earlier tonight where the Motor City Machine Guns defeated Cheeseburger/Will Ferrara and The Rebellion in a triple threat tag team match. Rebellion did a beat down after the match, with Shane Taylor coming out and getting involved. Punishment Martinez came out after the match and immediately wanted to face Frankie Kazarian. They had a good, short match with Martinez winning with the South of Heaven chokeslam. Page got involved here, distracting Kazarian.

Bobby Fish comes out following intermission. He says some of you may be shocked to see me, but he is not done with Ring of Honor. There is a list of people in the back he still wants to face, and at the top of that list is Jay Lethal, citing their match from Vegas.

Silas Young comes out, cutting him off. He is tired of hearing about Jay Lethal, and he’s even more sick of hearing Fish’s excuses. Fish tells him he could care less, then tells him to enter the ring so he can teach him a lesson. A referee comes in, and sure enough it’s a match.

They brawled around the ring. Fish bumps into the referee Paul Turner, seemingly injured his lef in the process. Young goes to use a chair, but Todd Sinclair comes in and breaks it up. Silas shoves him for the DQ.

Lots and lots of spots to start things off. Ospreay is thrown into the ropes, but springboards and takes out both of his opponents. Ospreay jumped onto the top rope and did a sky twister press for a near fall. Lee grabs Ospreay on the outside and lands a hurricanrana to the floor. Volador follows with a wipeout, White follows suit and Ospreay does the Sasuke Special but White grabs him and drills him on the apron instead.

This was a match where a lot of the time there were just one crazy spot after another, like where Ospreay lands a spanish fly but Lee immediately follows with a strong dropkick. Lee double stomps Volador on the middle rope. Ospreay did one of the biggest shooting star presses I’ve ever see on on the outside, taking out Dragon Lee. Volador followed that up with the hurricanrana off the top rope for the win, pinning White. Crazy match that very much lived up to expectations.

All four men shook each other’s hand after the match, posing together for the fans.

They start off slowly, just stalling and filling up time. Castle takes advantage early, taking him down but Daniels counters with a lariat and sinks in the koji clutch but Castle gets his foot on the ropes. Castle drapes Daniels on the ropes and levels him with a knee strike that sends him to the floor.

Daniels takes him out and goes for the BME but Castle follows with a German suplex pin. Daniels counters with another koji clutch but Dalton somehow manages to get to his feet. They do several reversal spots until Daniels kicks him in the quad and rolls him up for the win. This was getting good towards the end, but didn’t feel like a world title match and spent a little too much time just feeling each other out.

Cody came out and jumped both men after the match, planting Christopher Daniels with the crossroads. He grabs the ROH title and lifts it high, clearly indicating he wants the next title shot. Kazarian comes in for the save.

After holding the Superkick title belts high, the Hardys gained control of the match early until they tried for Whisper in the Wind but the Bucks countered with superkicks. Hardys gained their momentum back and grabbed a ladder but the Bucks did a double baseball slide and wiped them out, then followed that with stereo suicide dives.

Hardys set up the ladder but the Bucks come back and start brawling. Matt Jackson takes the first table spot of the night. Hardys are in control until Matt Jackson seesaws Jeff with a ladder. Nick unleashes a 450 splash to the outside on Jeff. Both Matts battled on top of the ladder until Hardy takes out Jackson but the Bucks come back and send Matt reeling.

Bucks go for a double team until Jeff breaks it up. Hardys lay out Nick with an inverted wheelbarrow suplex onto one of the ladders. Matt and Nick battle it out on top of the ladder. Nick hops across another ladder, but falls to the outside and onto another table. That leaves the Matts back at it. They exchange punches until both tilt over to the ropes and slingshot themselves.

They eventually all get back and start climbing two ladders as both teams exchanged punches with one another until the Bucks nailed the Hardys with superkicks. Both Hardys fell to the floor as the Young Bucks grabbed the titles to win them once again. This was a match that had a bunch of crazy ladder and table spots. If you like Young Bucks matches, this was definitely up your alley and the Hardys very much held their own.

Matt Hardy says they have been wrestling for 25 years and he can say this with absolute confidence — the Young Bucks are the best team they’ve ever faced. He doesn’t know how long these vessels can hold up to do this, but he gives them the ultimate respect. They shake hands and hug as Jeff Hardy sings his obsolete song. The Bucks and Hardys raise each other’s hands as a pyro celebration emerges and the show goes off the air.