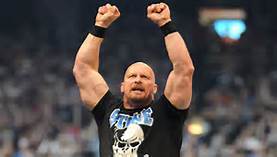 On a recent edition of his show, WWE hall of famer Steve Austin talks about a famous European tour picture where everybody was partying hard:

“The picture is probably from, it was ’97 or ’98. I’m almost positive. And this was, we were on a tour. We were over in Germany and over in the U.K., either one. I don’t remember which country we were in, but it was on that tour because we would go to Germany for seven days, and then, we’d go to the U.K. for seven days, or vice versa. And this is the back of a tour bus. And, I tell you what, we we’re traveling with two tour buses. Normally, it was heels on one bus, and babies on the other bus. It’s a circular table back there and you see in the picture, damn near everybody has a beer. The beers are all covered up because there are so many arms. Henry Godwinn has got a bottle of Jack [Daniels] and Steve Austin we were passing that thing around. There are 11 people crowded around this table. Not everybody was in the back of the bus. Not everybody was in on the party thing. There are a lot of guys in all the seats up ahead, so, man, we probably had a crew of guys, man, probably 30 strong. Everybody on the damn back of the bus was drinking, except Triple H. Only every now and then would Triple H would have a drink with the boys because the dude just doesn’t drink and he’s into his body and his physique. This was what it was like every single night. Once you got through, everybody hit the showers, everybody got their stuff, everybody got on the bus, they had a to-go meal, and, man, as soon as we got on that bus, the drinking would commence. A lot of times, back in those days, those trips were anywhere from, shoot, two or maybe an hour-and-a-half, to seven hours long. It would all depend on where you were and which country. Some of them were quite extensive and guys would be passed out. And what we’d do, we’d just go back there, pass that bottle of whiskey around. If we’d drink that one, we’d pass another one around. Most of the guys were drinking beer. If you were to look in the front of the bus, there’s a big container, like a plastic box, iced, full of beer, whatever the local flavor was of whichever country we traveled in, that was always in the box and we always had beer.”

#throwback can you name everyone in this picture?