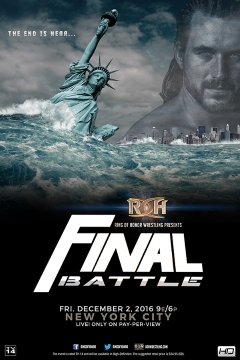 The Rebelleion of Kenny King, Rhett Titus & Caprice Coleman defeated Chris Sabin, Alex Shelley & Donovan Dijak after a many finishers with Titus hitting a Big Dawg frog splash on Sabin for the pin

Cody (Rhodes) defeated Jay Lethal after a low blow
-Cody went full heel at the finish of the match even going after Steve Corino. The Addiction who were on commentary and put over both men strong before the match came to Corino’s aid but still felt like a swerve is coming. It’s Christopher Daniels so gotta expect something.

World Tag Team Championship: The Young Bucks defeated The Briscoes after multiple superkicks to both Briscoes

After the match, the lights went out and Matt Hardy appeared on the screen saying he and Brother Nero were coming to ROH to delete delete delete the YB

ROH World Championship: Kyle O’Reilly def Adam Cole via submission with an armbar on thumb tacks to win the title