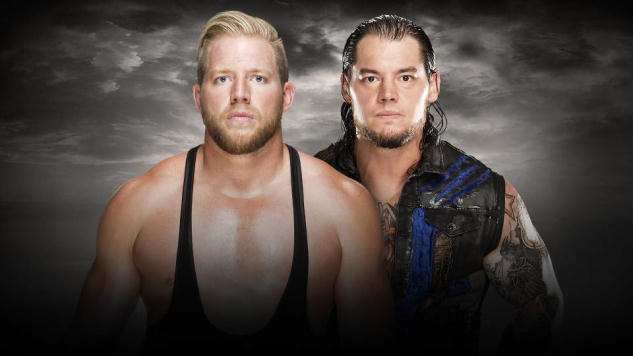 Baron Corbin vs. Jack Swagger
They brawl from the bell and Swagger takes Corbin down with a shoulder block. Swagger sends Corbin to the outside and slams him into the barricade and the announce table. Corbin comes back and kicks the steel steps into Swagger’s hand, which was placed between the steps and the ring post. Corbin tosses Swagger back into the ring and works over his arm in the corner. Corbin takes Swagger down to the mat and then continues the work on the arm. Corbin delivers an elbow shot and then charges in the corner, but Swagger elevates Corbin into the ring post. Swagger delivers a forearm shot, but Corbin sends Swagger into the corner. Corbin charges, but Swagger moves and delivers two corner clotheslines. Swagger slams Corbin down to the mat and delivers the Swagger Bomb. Swagger goes for the cover, but Corbin kicks out at two. Swagger goes for the Patriot Lock, but Corbin counters and connects with Deep Six. Corbin goes for the cover, but Swagger kicks out at two. Corbin nails Swagger in the back of the head, but Swagger comes back with a big clothesline. Swagger goes for the cover, but Corbin kicks out at two. Swagger grabs Corbin’s ankle and locks in the Patriot Lock, but Corbin makes it to the apron to break the hold. Corbin pokes Swagger in the eye and delivers the End of Days to get the pin fall.
Winner: Baron Corbin.

We see the video hype package for the feud between The Miz and Dolph Ziggler.