Statement and Photo from Jamie Noble on Weekend Stabbing Incident

As noted, WWE producer Jamie Noble was stabbed multiple times following a road rage incident near his home in West Virginia several days ago. Noble reportedly cut off another motorist on the highway, leading to that man and two passengers following Noble to his home in Mercer County, WV. Police say the men then stabbed Noble twice, once in the upper-back and once in the middle of his back near the spine.

The incident with Noble was the source of much stress and concern backstage in WWE. According to PWInsider, Noble took to Facebook and posted this statement (edited) on what happened:

I was viciously attacked in my front yard. One coward got out of the car saying I pushed him off the road. I immediately [apologized] because I was on the road all week and Just that night alone I got off work Tuesday night and drove from Cleveland to Princeton so I could have been tired and drifted over the yellow line. [Nonetheless] I apologized and he could have called the cops. But no that’s not what [happened]

I pulled in to my house and the car rolled up on me the guy was talking and getting out of the car at the same time as I said sh** dude if I cut you off I’m sorry. At that point the first punch was thrown it hit me. The guy got cocky and started talking sh** like a punk. He tried a second shot and ended up on his head and me on top of him pounding the sh** out of this trouble maker. At this point his two p***y friends that I didn’t see jump out of car and start in on me. I refuse to quit and at less [note: Gibson meant unless] one pulls a knife like 3 on 1 wasn’t enough.

In the middle of this madness one coward pulls a knife stabbing me once through the back near my [spine]. The blade went between my ribs and hit my lung. I still tried to fight back and then. They tried to cut my throat I was able to get them to miss the throat and rip my shoulder open. My girl busted out of the house saving me from any more damage.

I end up in Princeton but my lung is [filling] up with blood and they need to Medevac me to a big hospital. The weather was tough so I had to ride the ambulance. The whole tome bleeding out on the inside. Felt like I was having a heart attack. Got to Roanoke VA went straight to surgery that was tough. Then spend 4 days trying to get my lung working again. Walking around with tube in my [chest].

Good news is I’m getting a little better everyday. And I will be back on my feet 100% soon. I need help from my [Facebook] family. I need you to share this with everyone you can. Somebody knows something, or heard something, saw something that can help me get these criminals because the law isn’t going to. Please ask, listen, anything that can help me just get me one name. Just one. This could have been my 63 year old dad or my 16 year old boy…can you even imagine that???? I can’t.

I’ll also pay $200.00 for a name and if it turns out legit I’ll give you another $500.00 cash. Please share this every friend you have and [help] me get a name. You can private msg me the name or a number and a meeting spot. We have to get these boy-man. Their leader went down like a 14 year old girl so [they’re] not much. Please help me. 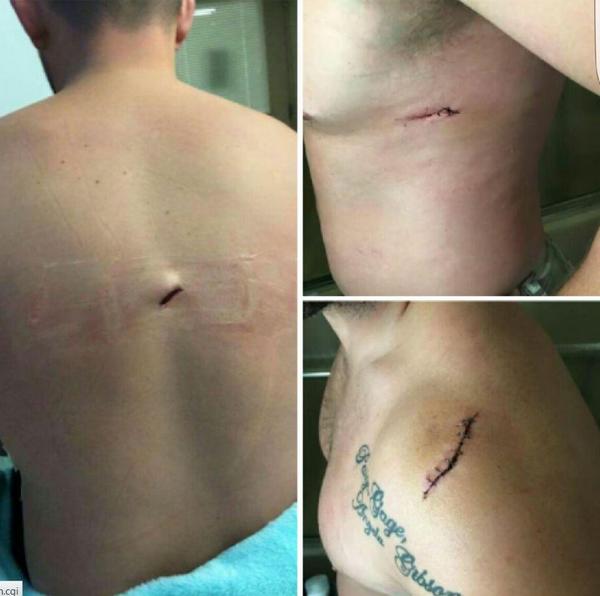