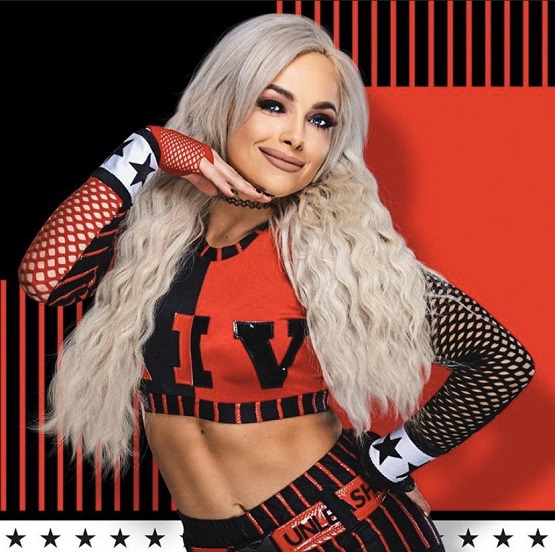 – Daddio signed a contract with WWE in 2014, and was assigned to their developmental territory in October.
– She made her first televised appearance at the NXT TakeOver: Rival event on February 11, 2015, as a planted fan who jumped on Tyler Breeze during his ring entrance.
– In June 2015, Daddio made her in-ring debut at an NXT live event, teaming with Charlotte to defeat Jessie McKay & Lina
– In October, Daddio (as Marley) made her televised in-ring debut, losing to Eva Marie
– By mid-November, Daddio was wrestling as Liv Morgan
– On the January 13, 2016 episode of NXT, Morgan competed in a battle royal to determine the number one contender to Bayley’s NXT Women’s Championship, which was won by Carmella.
– Morgan made her main roster debut on the November 21, 2017 episode of Smackdown Live alongside fellow NXT alums Ruby Riot and Sarah Logan. The group would become known as The Riott Squad
– The next week, the group won their first main roster match, defeating Charlotte Flair, Naomi & Natalya
– In the 2018 Superstar Shakeup, The Riott Squad were moved to the Raw roster
– Morgan was drafted back to Smackdown in the 2019 Superstar Shakeup, signalling the end of the Riott Squad, though would barely appear for the blue brand before returning to Raw later that year
– On the WrestleMania 36 pre-show, Morgan defeated Natalya
– In August 2020, Morgan & Riott reunited to reform The Riott Squad as a tag team
– On the Payback 2020 pre-show, The Riott Squad defeated The Iiconics (Peyton Royce & Billie Kay)
– The Riott Squad were drafted back to Smackdown in late 2020
– Riott was released in June 2021, leaving Morgan to go solo once more
– Morgan was moved to Raw in the 2021 Draft
– Morgan was a member of the victorious Team Raw at Survivor Series 2021
– At Money In The Bank 2022, Morgan won the briefcase in the eponymous Ladder Match, before cashing in to defeat Ronda Rousey later in the show to win the Smackdown Womens Title
– On the July 15 episode of Smackdown, Morgan defeated Natalya to retain the Smackdown Womens Title
– At Summerslam 2022, Morgan defeated Ronda Rousey to retain the Smackdown Womens Title
– At Clash At The Castle 2022, Morgan defeated Shayna Baszler to retain the Smackdown Womens Title