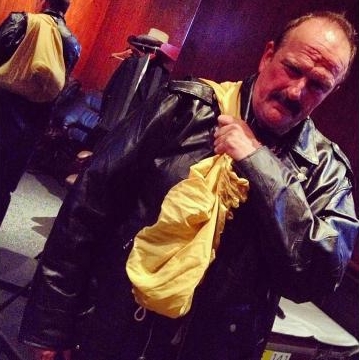 Reviewed by Steven Wilson of The Rowdy Wrestling Podcast (@rowdywrestling on Twitter, Also Available for weekly download on Itunes and other great podcasting apps)

Its been a long time since Jake “The Snake” Roberts performed in front of a sold out crowd here in Montreal. For many years it looked as though he had gone well past the point of no return. As he is quick to point out he has been reported dead several times over the years, and many had given up on him. Wednesday night however, Jake made a triumphant return to Montreal to entertain his fans in a truly unique way, as he brought he Unspoken Word Tour to Comedy Works in downtown Montreal and for nearly 90 minutes Jake once again had a crowd hanging onto his every word as he worked the mic as only Jake can.

So what exactly is the unspoken word tour? After all the idea of a professional wrestler holding a show in a comedy club is not necessarily where you’d expect to find one of your childhood wrestling icons performing, but the truly unique experience is something your not likely to forget. The show features a mix of road stories, inspirational messages, and a little bit of dirty comedy, a perfect mix for the wrestling fan crowd that had gathered to see Jake in person.

If you’ve followed any part of Jake’s story over the past few years you know how much of a battle he has had with addiction. The new documentary, The resurrection of Jake the Snake Roberts, now up on Netflix, showed just how hard it was for Jake to take on the demons he had become best friends with, So to see Jake in a comedy bar, seemingly unfazed by the fact that he was surrounded by alcohol, while he quietly sipped on his Starbucks coffee in the background watching his opening acts warming up the crowd it made you realize just how far he has come. Admitting during his performance that for the better part of 18 years he needed an 8 ball of cocaine a day to get by combined with a constant stream of alcohol, you would not expect the same person to be on his best behavior sipping on a coffee. Now clean thanks to his friend Diamond Dallas Page and the DDP Yoga crew, the Jake The Snake we were treated to was quite the different man.

Opening act Ryan Dennee has been on the road with Jake since he began the tour, and kicks off the night with numerous funny road stories of how he is constantly getting ribbed by Jake and his wrestling friends like Hacksaw Jim Duggan as they travel throughout north america. Plenty of funny stuff here. Local Montreal wrestling icon The Green Phantom also got a few minutes in front of the crowd, he and Jake have some history as Jake performed on a indy show back in 2001 in Green Phantoms home town of Two Mountains. Phantom provided your corny but funny wrestling shtick for the night and then it was time for Jake to take the stage.

Jake’s set is quite the trip as he shares a slew of hilarious road stories from his career but along the way takes the time to deliver a powerful message when it comes to battling addictions. The opening minutes has Jake joking about how dope helped him come up with the idea of carrying a snake around to the ring, but also how funny it can be to have to constantly deal with having a snake in your hotel room while your screwed up on dope. This sets up Jake taking a few minutes to reflect on his demons, his attempt to conquer them and the help he received from Diamond Dallas Page. Jake not only encourages those who need help to seek it, but for those who know someone who needs help to go that extra mile and offer it because sometimes thats what they need, Jake goes as far as to offer to speak with anyone who needs help after the show, and in case your wondering he made himself available to the public after in case someone wanted to take him up on that offer. It was some very touching moments, especially for me who has closely followed his comeback in recent years. The time he takes out to talk about his battles in no way affects the enjoyment of the show as the somewhat serious note sets up the hilarious slew of stories he gets to after

From having to deal with snake poop mid ring, to the crazy personality of Randy Macho Man Savage, Jake had the crowd laughing throughout his set, and although ive heard at least a few of these stories before, it was still funny and entertaining due to his delivery. For example Jake has one of the best Randy Savage impersonations out there and even though we’ve all heard the story behind his snake biting down on Randy Savage’s arm in a WWF ring, the delivery still has you laughing out loud.

In closing, the unspoken word tour is not your typical comedy event, Jake takes you on an adventure as only Jake can, the master of psychology captivates your attention and before your know it an hour and a half has passed and you dont even realize it. I highly recommend it, it’s well worth the price of admission.

Jake announced a return date, as he will do a part 2 on Wednesday July 20th once again at Comedy Works in downtown Montreal.