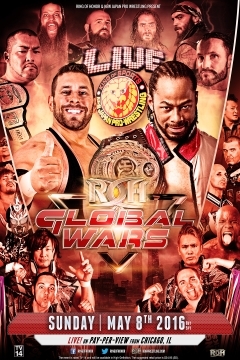 RODERICK STRONG VS. ADAM PAGE VS. ACH VS. DALTON CASTLE – WINNER GETS A TV TITLE SHOT

Crowd was weak early, but picked up when ACH did a flip dive. The match kept moving with a lot of good moves. The finish saw Strong use a superplex, gutbuster and sick kick on Page, but then Castle used the bang a rang, dropping Strong onto Page and Castle pinned Page.

After the match, Strong got mad saying that he’s the best wrestler in the company and had the TV title shot.

They did the big upset finish as Daniels was being cocky and doing finishers on Cheeseburger when Cheeseburger pinned Daniels with a front rolling cradle. Right before the finish, Daniel & Kazairan laid out Liger with Celebrity Rehab and Liger landed on his head. He was selling the neck but it was clearly a sell spot but he was out for the rest of the match.

Daniels and Kazarian laid out Cheesebuger as Daniels gave him a low blow. They used the Best Meltzer Ever after the match, which is a combination tombstone piledriver and Daniels coming off the top rope onto him.

War Machine retained when Hanson gave Jay a spin kick and then they used the Fallout on Mark — a move where Hanson came off the top rope while Rowe held Mark up. Hanson pinned Mark. This was a wild match. The crowd miking on this show is weak or the crowd is real quiet. The match wasn’t smooth at all, but there were a lot of big moves and the crowd did give them a “This is awesome” chant. Jay put Hanson through a table with a double foot stomp. There were several dives and they did a lot of big stuff. Hanson also kicked out of both Froggy Bow (elbow off the top) by Mark and the Jay driller by Jay. Fans chanted “Thank you” when it was over.

This was the best actual wrestling so far on the show, very good and Naito came across like a superstar but the crowd miking issue took this match down. O’Reilly did all of his stuff with the various submissions and Naito did his usual spots and mannerisms. The crowd at points lightly booed O’Reilly, but mostly were into the match. O’Reilly got a near fall with a bridging back suplex but Naito used a spinebuster and Destino for the pin. After the match, Naito used a low blow on O’Reilly and then threw the belt in the air. Before the match, Naito also dropped the belt down and showed no respect for it.

This was a significant result because Tanahashi & Elgin are a regualr New Japan tag team and they lost this match. Moose speared Elgin and Okada then hit Elgin with the Rainmaker to win. The fans were really into Tanahashi vs. Okada when they were in together. A lot of good stuff here including Okada and Moose both doing the dropkick with Tanahashi and Elgin sitting on the middle rope. Moose did a dive off the top rope to the floor on both Tanahashi and Elgin. Elgin did a delayed vertical suplex on Moose. The crowd knew most of the spots, even chanting “Ace” when Tanahashi did the Moose arm deal. People were on their feet a lot and did another “This is awesome” chant but it still felt quiet a lot. Good match.

They put over that Fish is 39 years old and this may be his last big chance. This was weird because Ishii worked the same kind of match he’d work if it was a Japanese big show and Fish was right with him but the crowd was so quiet. Fish won the title clean in the middle by choking Ishii all the way out. Ishii never tapped but went out. The crowd was shocked tHat was the ending. You can tell the place is porly miked beause everyone is standing, you can see people chanting but can barely hear it. This was the best match so far. Really hard hitting from start to finish, hard chops & hard kicks by Fish, Ishii did his headbutt spots and a delayed superplex spot.

This was a fast paced match with all kinds of big moves. The match was built around the Bucks setting a record for the world’s largest superkick party for a superkick record. Mr. Wrestling III had a superkick counter, but it totaled zero superkicks. This had the most reaction of anything on the show. Kushida and Sydal are two of the best wrestlers in the world, and Shelley did a lot of unique moves. The Bucks mostly were selling stuff while Tonga & Loa played monsters no selling stuff. After Kushida did a flip dive over the post onto Tonga & Loa, the Bucks used the Meltzer Driver on Shelley for the pin.

They had a confrontation at the desk with Mr. Wrestling III and B.J. Whitmer, who came out wearing a Masked Superstar mask since Superstar was a big rival of Wrestling II. Whitmer handed him a flash drive and told him to go to his hotel room and watch what’s on it after the show — clearly the next stage in the Corino vs. Whitmer feud.

They noted that they didn’t introduce the new Bullet Club member. That is still to come.

They were out there having a good match. Cabana was really over with the crowd, being it was in Chicago. Taeler Hendrix interfered and Nigel McGuinness and ref Todd Sinclair ejected her, McGuiness dragging her to the back. Cabana had Lethal in the Billy Goat’s Curse when Hendrix came back out and dragged Sinclair out of the ring. The Bucks came out, seemingly to superkick Hendrix for interfering, but she moved and they nailed Sinclair. But then they nailed Hendrix anyway.

The Bucks had two Bullet Club shirts and gave them to Lethal and Cabana. Then the lights went out. Adam Cole was in the ring with a Bullet Club shirt when they came on and they all superkicked Lethal and Cabana and a million security guards. Everyone was superkicking everyone, including Kevin Kelly, Mr. Wrestling III, a camera man and even Mr. Massie (the Bucks’ father). He jumped in the ring and they stopped Cole from superkicking him, but then they superkicked him.

Tonga & Loa spray painted BC on a table and Loa powerbombed a security guard through the table. This was all very reminiscent of an NWO-era Nitro show. The crowd kind of booed them as it was designed as a heel turn. They put zip ties on Lethal, and Cole kept superkicking him. Cole grabbed the belt, clearly teasing the idea that Cole was going after the title next.

At another point, after they took out the announcers, Matt got on the headset and pretended to be Jim Ross doing “This man has a family” and “stomping a mudhole” and called Nick “King.” So, the show ended with a ring and floor with more than a dozen people laid out and the Bucks, Cole, Tonga, and Loa left standing.