Cameron Says the WWE Universe Has Cyber-Bullied Her 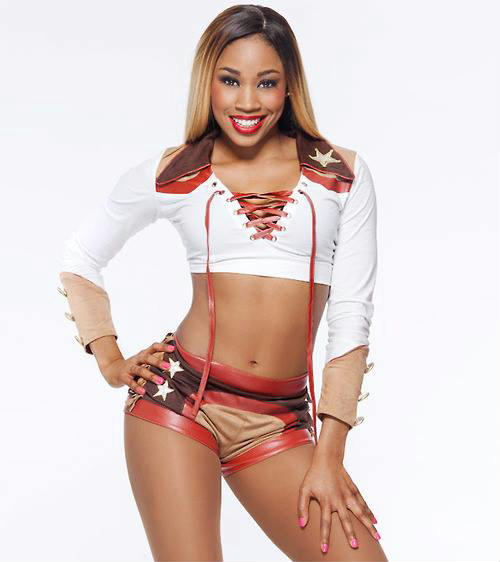 This afternoon, Cameron took to Twitter and published a blog on how she’s been the victim of cyber-bullying:

First I want to make it clear that I respect everyone’s freedom of speech and opinion however, I do believe one should understand a situation before they speak out in a public forum.

My “Amen brother” comment has seemed to bother some of the IWC who hasn’t taken the time to actually comprehend the substance of Ryback’s statement. I fully support my peers in WWE and I respect those who have the courage to stick up for what they believe in. Regardless of whether I agree with his feelings or not, I applaud Ryback for standing up for himself and openly speaking his mind. If you don’t value yourself and believe in yourself there is no reason for anybody else to.

We the performers know what goes on behind the scenes day in and day out in our business and how much we sacrifice and put into our craft. Every superstar on the roster works relentlessly to improve themselves and be the best performer that they can be. Whether they are a perennial champion and “the face of the company” or if they are a “jobber” we all work very hard to entertain our fans. You may think somebody sucks or has no talent and thus should be fired but that does not mean that performer isn’t busting their ass and doing what’s asked of them. I love the WWE universe because they are some of the most passionate and loyal fans in the world. I think the majority of the fans are very smart and very invested in the business but some, who appear to be the most vocal on social media, continue to do nothing but bash talent and twist words to suit their own agendas on a daily basis.

Every single day I get at least one tweet or read one post where someone is bashing me for what I said on Tough Enough 5 years ago or for my botched pin on Raw. Look in the mirror and tell me you never made a mistake in your life. I am human after all. I have seen legends in the past and my current peers make mistakes in the ring and during promos, it happens get over it! I never claimed to be a childhood avid wrestling fan. Everyone takes a different path into the WWE. Some come from sports backgrounds, some from dancing and modeling while others have trained their entire lives to become a WWE superstar. 5 years ago when I was on Tough Enough I did not possess the knowledge of professional wrestling that I do today. I earned the opportunity to be on that show and despite being the first one eliminated I was signed to a contract. Since that day I have worked my butt off to improve my wrestling skills. I have studied long and hard to understand the business and it’s history because I understood why the WWE fans were so offended by my response to Mr. Austin’s question.

I have trained hard and done everything that has been asked of me. I know that doesn’t make me special because we all do that here, but it goes to show that despite what you read or see on the Internet the passion to be great, the drive to be successful and the blue collar work ethic is there.

Cyber bullying is a major problem. Yes, we understand that we are public figures and yes we know coming into this business that we will be analyzed under a microscope 24/7 for everything we say and do but is there really any reason to tell someone that they must sleep around to be where they are? Is there any reason to tell someone they should kill themselves or to attack their family and personal issues over wrestling? I can’t think of a single reason.

I know some may read this rant of mine and bash me even further. I accept that. I do not intend to disrespect anybody with this rant. I merely want to share my feelings with you all since a lot of you feel the need to bash talent and bully them on a daily basis with your tweets and posts. The passion you have for our business is respectable but the way some of you express it is deplorable. For those fans who are respectful and spend their precious time and money on us I thank you and love you with all my heart. For those who are not fans of me and voice their opinions in a respectful and constructive way I thank you and appreciate your criticism. For those who do nothing but bash talent in a disrespectful, cruel and personal way I have nothing to say to you except give your mother my love when she comes downstairs with your dinner