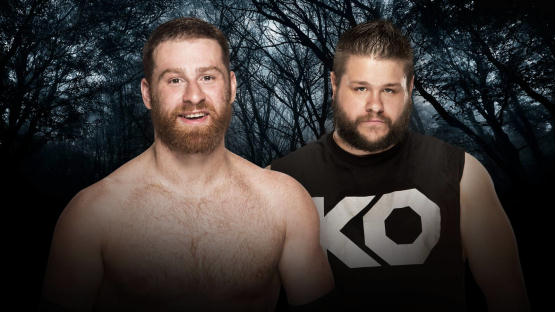 Owens and Zayn brawl immediately and Zayn sends Owens to the outside. Zayn dives out onto Owens and then tosses him into the barricade. Back in the ring, Zayn stays in control, but Owens quickly takes control and slams Zayn to the floor and into the steel steps.

Michael Cole gives an update on Enzo Amore: he is able to move his arms and legs and is talking. Great news!

Back in the ring, Zayn goes for the Helluva Kick, but Owens counters with a superkick of his own and then hits the Pop-up Powerbomb for the pin fall.
Winner: Kevin Owens.

After the match, Owens slaps Zayn and then tosses him over the top rope. Owens yells at Byron Saxton to bring him a microphone in the ring. Saxton gets into the ring and Owens tells him to ask him about beating Sami. Saxton asks him if the rivalry is finally over. Owens says that’s not what he told Saxton to ask, but he beat Sami Zayn. Owens says he is the better man. He says he is going to refocus and get back his Intercontinental Championship. Saxton says the Intercontinental Championship Match is next and he would love to do commentary for the match.

We see a commercial for the various shows on the WWE Network.