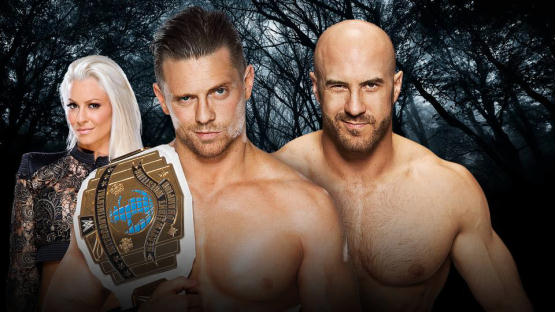 Sami Zayn dives over the announce table and takes out Kevin Owens.

Back in the ring, Cesaro drops Miz and does the Cesaro Swing for somewhere around 20 rotations. Cesaro locks in the crossface and Miz taps, but Owens and Zayn fight on the apron and the referee gets distracted by it. Cesaro knocks Owens and Zayn off the apron and Miz rolls Cesaro up from behind for the pin fall.
Winner and still WWE Intercontinental Champion: The Miz.

After the match, Cesaro takes Miz out with the Neutralizer and then Owens takes out Cesaro and Zayn. Owens goes after Miz, but Maryse pulls him out of the ring.

We see Stephanie McMahon talking with Apollo Crews backstage and then see that Chris Jericho and Dean Ambrose will go one-on-one next.

We see the video highlight package for the feud between Jericho and Ambrose.

Michael Cole updates Enzo Amore’s condition: He is still moving and communication and he is undergoing testing at a hospital in Chicago.