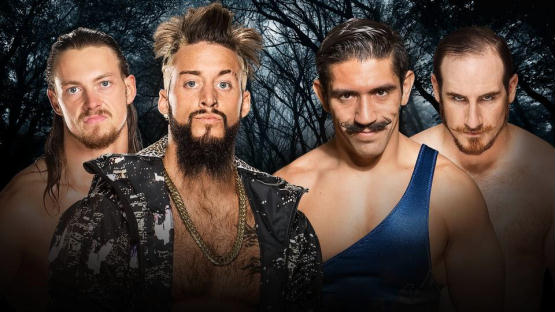 Payback opens with The New Day entering the arena. The WWE Tag Team Champions get into the ring and Xavier Woods welcomes everyone to the show. He says one team will have the opportunity to become the number one contenders for their WWE Tag Team Championship and Kofi Kingston says they want a front row sheet. They mention Beyonce and some other pop culture things and Big E says it’s a new era and times are changing because New…. Day Rocks!

We see the opening video for the Payback event, which focuses on the different matches for the evening. It ends with the billing of Payback as “The First PPV of a New Era.”

The New Day are still at ringside as Enzo and Cass’ theme hits. Gotch and Enzo start the match. Enzo monkey flips Gotch down and goes for a quick pin, but Gotch gets out and tags in English. Enzo also tags in Cass. Cass takes English to the corner and delivers a few right hands. Cass takes English to the other corner and tags in Enzo. Enzo tags back in and he and Cass double-team Gotch and then English. Cass tosses Enzo onto English and Enzo goes for the cover, but English kicks out at two. Enzo sends English to the corner and charges, but English gets his knees up to counter. English charges at Enzo and sends him out to the floor. Enzo hits the bottom rope and floor and doesn’t move, so the referee throws up the “X” and calls for the medical team. They bring the stretcher out and the referee calls for the bell.
Match Result: No Contest.

We take a look at the video package that highlights the feud between Kevin Owens and Sami Zayn.