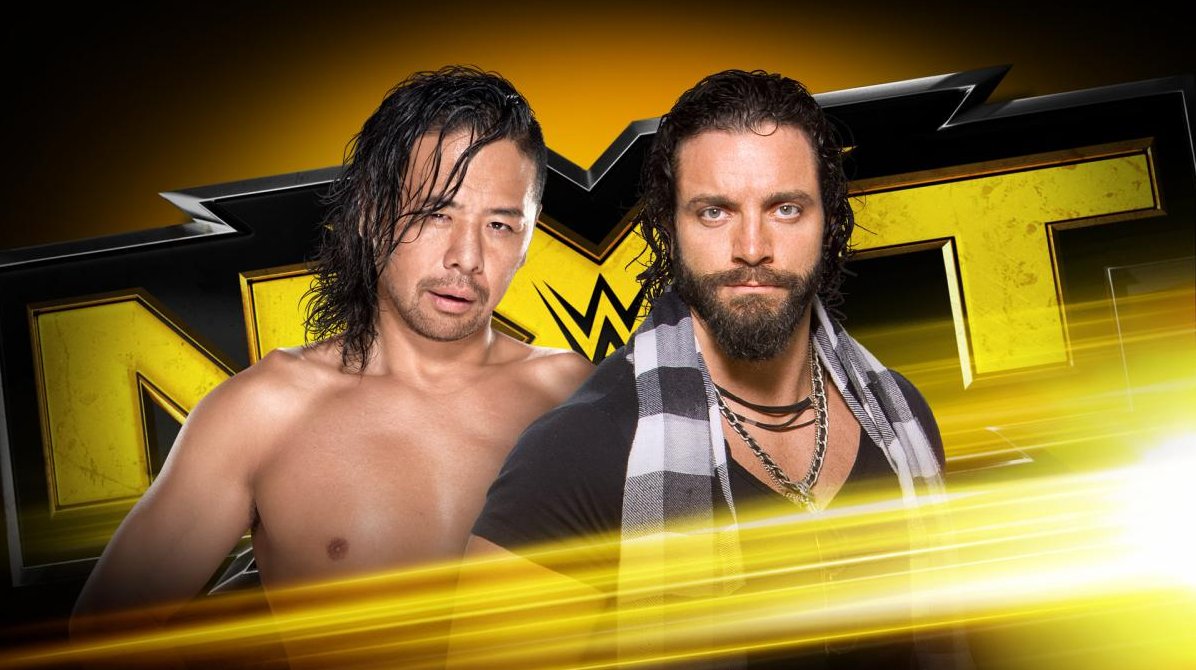 This week’s NXT kicks off with the usual opening video, and then Tom Phillips and Corey Graves welcome us to the show from Dallas, Texas. We see that we will take a look at Samoa Joe winning the NXT Championship from Finn Balor at an NXT live event in Lowell, Massachusetts later tonight.

Match #1: Asuka vs. Eva Marie
The crowd chants “You can’t wrestle” at Eva Marie from the start, and Graves says the crowd shouldn’t chant that at Asuka. They tie up and Eva wrenches the arm of Asuka. Asuka counters and goes behind Eva and then kicks her in the back. They tie up again and Eva connects with a back elbow to Asuka. Asuka comes back and takes Eva down to the mat. Eva gets up and goes for a clothesline, but Asuka ducks underneath and takes Eva down with a hip shot. Asuka goes for the arm bar, but Eva gets to the ropes. Eva gets on the apron, but Asuka knocks her down to the floor. Nia Jax comes to the ringside to check on Eva Marie as we head to a break.

Back from the break and Eva is in control. She splashes down on Asuka and goes for the cover, but Asuka kicks out at one. Eva applies a submission down on the mat and then kicks Asuka in the face. Eva chokes Asuka over the rope and then takes her down to the mat again. Eva applies the submission again. Asuka gets to her feet and fights out and takes Eva down with a back slide, but Eva kicks out at one. Asuka kicks Eva repeatedly down on the mat. She goes for the spinning back kick, but Eva ducks and slams Asuka down to the mat. Asuka comes back and drops Eva with a sliding knee and goes for the cover, but Eva kicks out at two. Asuka charges in the corner, but Eva gets her boot up. Eva charges this time, but Asuka gets a boot to the face and gets the pin fall.
Winner: Asuka.
After the match, Nia Jax gets into the ring and gets in Asuka’s face. Nia helps Eva to her feet and they leave the ring together.

We take a look back at last Thursday night’s live event in Lowell, Massachusetts, and see highlights of the NXT Championship Match which saw Samoa Joe defeat Finn Balor to win the title. We go to an interview with Samoa Joe, and he says a word about his title victory is that he is the inevitable and that Finn Balor didn’t survive this time.

We see that Shinsuke Nakamura will go one-on-one with Elias Sampson later tonight and The Revival will be in action after the break.

Match #2: The Revival vs. Matt Lee and Jeff Parker
Dawson and Dash double-team Parker and then send Lee off the ropes to the floor. Dash slams Parker into the corner and Dawson tags in. The Revival double-team Parker with the top rope combo clothesline. Dawson tosses Parker into the corner and Lee tags in. Dawson beats down Lee and Dash tags in. They double-team Lee and Dash makes the pin fall.
Winners: The Revival
After the match, Dawson attacks Parker outside of the ring. Dawson then grabs a microphone. He says there’s a reason that they are called The Revival. He says they are preaching the sermon of the tag team revolution and that they are the best tag team on the planet. He says they have to have the NXT Tag Team Championship and they are putting every tag team on notice. He says they will not stop until they are back on top.

We see that The Hypre Bros will be in action against Blake and Murphy after the break.

Match #3: The Hype Bros vs. Blake and Murphy
Mojo and Blake start the match. Blake applies a headlock, but Mojo shoves him away. Mojo drops Blake with a clothesline and then tags in Ryder. Ryder takes Blake down with a neck-breaker and goes for the cover, but Blake kicks out at two. Ryder gets Blake in a headlock, but Murphy tags in. Ryder takes down Blake and Murphy, but they roll to the outside. Mojo dropkicks both of them on the floor. Zack tosses Murphy back into the ring, but Blake trips Ryder up, Murphy takes advantage and works over Ryder’s leg and tags in Blake. Blake continues the work on Ryder’s leg and then applies a submission. Ryder kicks Blake away, but Murphy tags in and keeps control for his team. Blake tags back in and extends Ryder’s knee over the ropes. Murphy tags in and Ryder sends Blake to the floor. Ryder tags in Mojo, who drops Murphy with a shoulder block and a big clothesline. Mojo splashes Murphy in the corner and Blake tags in. Mojo catches Murphy and causes him to kicks Blake in the head. Zack tags in and he and Mojo drop Murphy with the Hype Ryder for the pin fall.
Winners: The Hype Bros.
After the match, Dash and Dawson run to ringside and attack The Hype Bros.

We are reminded that Shinsuke Nakamura will take on Elias Sampson in the main event later tonight.

We go backstage and see Elias Sampson. He says he thinks that Mr. Regal misinterpreted his song and words. Sampson says he will make those clear soon enough. As for tonight, he says he will show Nakamura why he should have never drifted into NXT. The main event is up next after the break.

We see that Austin Aries will be in action on NXT next week.

NXT comes to a close with Nakamura celebrating his win in the ring.