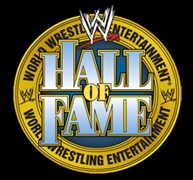 – The WWE Hall of Fame 2016 ceremony is sold out as the last couple of block of tickets were snapped in no time yesterday during the general public sale on Ticketmaster. The pre-sale kicked off two days earlier and the majority of the tickets were gone quickly as well, leaving only a limited number for yesterday’s sale. It’s likely that more seats will be added as soon as the set and production areas are figured out completely. So far only Sting has been announced for this year’s Hall of Fame. Just his name alone managed to sell out the American Airlines Center.