One Night Only: Live! 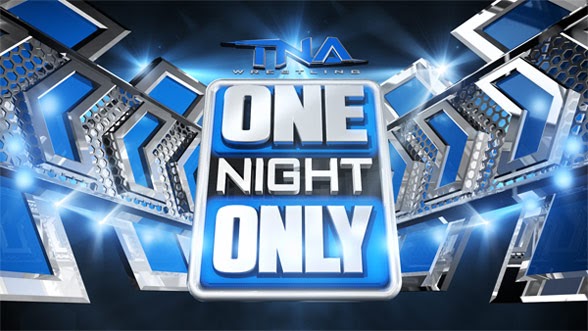 – Tonight’s TNA “One Night Only: Live!” pay-per-view opens from the Sands Casino in Bethlehem, PA with The Pope and Josh Mathews on commentary. We go to the ring.

Mandrews eliminated Steve first after a pretty nice Shooting Star Press while Steve had Uno, the champion, in a submission. Zema Ion was eliminated next after a roll up from Mandrews. Mandrews and Uno went at it with Tigre selling an arm injury. Tigre hit a nice super moonsault move from the top to retain by pinfall.

– After the match, Shane Helms comes out and teases he might be coming for Tigre in the future. Helms reveals a Hurricane t-shirt and points at his watch before exiting the ring.

– Jeremy Borash is backstage with Bram and Eric Young. They call Beer Money a disease and promise they won’t team again after tonight. Young also warns Jeff Hardy that he’s coming for him after Hardy cost Young the World Title.

Aiden cut a promo before the match and offered Spud the chance to walk away and lose by count out. Spud goes to walk away but gives Aiden the finger and they go to work. Aiden kept the microphone, using to hit Spud and tell him he tried to give him a chance to leave. They fight around ringside, against the barrier and the announce table before coming back in. Spud wins with the Underdog.

– Maria Kanellis cut a promo similar to the one she did on Impact Wrestling this week.

This was a decent match with solid back and forth action. They fought to the floor at one point but Bennett got the win after an Ace Crusher and Divine Intervention.

– After the match, Bennett cut a promo and said everyone’s hero has arrived and he will be building a “kingdom” of miracles. Bennett says we just saw a miracle tonight.

Madison and Jade started the match and Rebel was out after they went at it for a few minutes. Rayne was double teamed as they tried to eliminate her. Chelsea came down and evened the odds. Marti Belle was out next followed by Deonna. Rebel was eliminated after Chelsea pushed her off the top. Kong was out next and she attacked all but The Dollhouse. Kong eliminated Deonna and then Chelsea before Velvet came out. Velvet unloaded on Jade and Belle. Rayne eliminated Belle and Kong eliminated Velvet. Rayne eliminated Jade as it came down to Kong and Rayne. They went at it in a regular match and Kong got the win after a spinning backfist and the Implant Buster.

– JB interviews The Wolves backstage. Jessie Godderz and Eli Drake appear and a brawl breaks out.

Lots of back and forth, this was a crazy good match and worth going out of your way to see. Lee nailed a kick to the head, a double stomp and the fisherman’s cradle suplex for the win.

– JB tries to interview Kong backstage but The Dollhouse won’t let him. Kong warns Gail Kim that she’s coming for the title and says The Dollhouse will be a force to reckon with under her guidance

– The Pope is in the ring and calls out Grado. Pope says he’s been scouting talents while doing commentary and he has a problem with Grado. Pope calls him a joke and mocks him. This leads to Grado issuing an open challenge, answered by Abyss. Abyss rips Grado and the fans, then announces this will be a Monster’s Ball match.

They used a lot of weapons and thumbtacks in this match. Abyss took a cheese grater to Grado twice, once below the belt. Grado also took some nasty kendo stick shots. Grado went to the top at one point but got knocked off with a trash can, falling through a table that Abyss previously set up between the ring and the barrier. Abyss brought out his barbed wire bat, Janice, and some boards covered in barbed wire. Grado came back in with a chair and fought Abyss off. Grado kicked Abyss into one of the barbed wire boards and then splashed Abyss while he was in between two boards. Grado went to use Janice but Abyss chokeslammed him onto thumbtacks for the win.

– JB is backstage with Drew Galloway and Kurt Angle, who talk about their match on Impact next week. Drew promises they will win the titles tonight

Angle got a hot tag after Godderz and Drake controlled most of the early part of the match. Angle suplexed Drake and Godderz but then turned his attention to Eddie Edwards and Davey Richards, hitting a double suplex on them. Drake took Angle out but in came Galloway for the save. At one point The Wolves hit a dive to the floor, taking out Drake and Godderz. Galloway then hit a dive onto all four of them and thankfully Angle stayed in the ring. Davey and Angle went at it. Angle ended up with an ankle lock on Edwards while Davey had one on Galloway. Godderz broke it up and Drake hit Galloway with a title belt for a 2 count. Angle came back with a suplex for Drake. The Wolves take Angle out and double team Drake. Davey makes Drake tap to the ankle lock to retain.

Physical match to start. Lashley got suplexed from the floor and Tyrus exposed a turnbuckle while he was down. Tyrus later threw Lashley into the turnbuckle a few times. Tyrus hit a lot of big power moves but Lashley kept kicking out. Earl Hebner went down when Tyrus went for another shot on the exposed turnbuckle. Lashley took advantage and repeatedly ran Tyrus’ head into the exposed metal. Lashley hit a spear for the win.

– JB interviews James Storm and Bobby Roode backstage. They talk about reuniting and Storm says he came back to TNA because this is family. They promise to win tonight’s main event.

Storm and Young went at it to start the match, and it was on from there. Storm nailed a suicide dive on both opponents at one point. Storm also hit a nice hurricanrana at one point on Bram. After good back and forth action, Roode hit Bram with a Spinebuster, Young nailed Roode and Storm made the save with the Last Call superkick. Storm and Roode then finished Bram with a DWI for the win.

– Beer Money celebrated to close the show and it looks like they’re going to be challenging The Wolves soon.