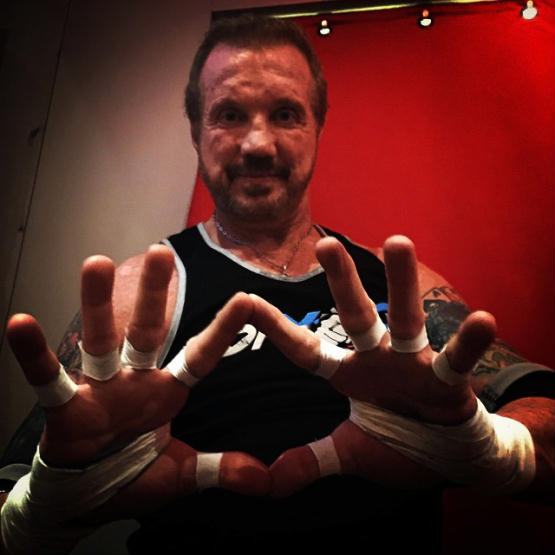 I recently had former WCW World Heavyweight and WWE European Champion “Diamond” Dallas Page on the show, and he had some great stories to share.

One in particular was a way to capitalize on both he and The Rock being called the “People’s Champion” in rival promotions.

When I commenced the topic by asking him why that feud never happened, he stated:

“It’s ridiculous. First of all: I am the biggest Rock fan on the planet. I love that he is the biggest star in the world right now, because he’s one of us. I met him in either 1999 or 2000. [He and Big Show] were wrestling in Canada, and we had a pay per view in Canada the night earlier. I went to the show, which nobody ever did. No one ever goes to the other guy’s show in WCW or [WWE], unless you were looking for a job. I wasn’t looking for a job. I just signed a multi-million dollar deal, so I wasn’t going anywhere. After the show, me and [Big Show] were getting ready to leave the building and he goes, ‘Do you want to meet The Rock?’ I said, ‘Sure. I’d love to.’ So we walked in the locker room and The Rock was there. We had a great talk. [He is] very humble. Rock has the ability to make you feel like you’re the only person in the room.

I was quite a step or two over him, at that time, but Jake told me to keep an eye out on him, because is gonna be a huge star in our business; and that was when he was booked as Rocky Maivia in 1996. He said that this gimmick that he has right now is lame, but at some point he is going to break away from this and become a huge star. So I told Rock that story, and I said I’ve really been watching your career, and I love what’s happening with it, especially now. We shook hands, and as we were walking out, almost halfway down the hallway I hear, ‘Hey Diamond.’ Big Show gets out of my way, and I see him in the far corner of that locker room. He says to me – and I can see he’s rolling in the character – ‘Ya know, there’s only one People’s Champion.’ Big Show just about blew his guts out, he laughed so hard. I just stared at him. And I bet you I didn’t say anything for 15 seconds. And I said, ‘You know, Rock? You’re right. And you, my friend? Well, you’re looking at him!’ [Big] Show went, ‘Oh my God, you stuffed him! Nobody stuffs him!’”

This gained a feverish level of excitement from Page, as he proposed to his then-wife Kimberly an angle of how he was going to debut in the WWE. “I woke her up and made her listen to me talk about how I was going to debut in the [WWE]. This isn’t now, but I am going to work a WrestleMania. I am going to end my career in the WWE. That’s just the way it is. I’ve never seen it any other way. I said here’s what’s gonna happen: they’re gonna cut all the lights in the building, and everybody is going to be for sure that it’s [Chris] Jericho. But it’s gonna go 15, 20, 30 seconds, no one says anything, people are grumbling. Jim Ross is saying ‘Hold on! Don’t change the channel. We’ve got some technical difficulties!’ And then, for the first time ever in a [WWE] arena, you hear my voice. Blacked out building. ‘Who’s the real “People’s Champion”’? Spotlight hits me. ‘You’re lookin’ at him.’ Throw up the diamond cutter. Bang. I would have got boos, I would have got cheers out the building. Rock’s gonna be hurt, he’s gonna be out, so he can’t answer my challenge. But that’s how it’s gonna be. I’ll go to the ring, I’ll cut this promo on him and go on a rant until he gets there. Then we’ll start our promos. They’ll be unbelievable!”

He also stated in the interview that one of his biggest regrets is not speaking up to Vince McMahon about this idea, and accepting the Stalker angle instead.
On Dec 5, 2015 11:51 AM, “Chris Featherstone”

Hey, everyone! This is Chris Featherstone from Sports Illustrated and the Pancakes and Powerslams Show. This week, I had the pleasure to interview former WWE Tag Team Champion Matt (Evan Bourne) Sydal on my show. We had a great conversation, talking about the current state of professional wrestling, why he has no qualms about WWE letting him go from his contract last year, and much more.

I posed a question to him about why professional wrestling is experiencing such a decline in ratings, and here is what he had to say about that:

“I understand that ratings are important. You have to realize WWE’s contract. They’re not getting paid from advertising money. USA makes that money. WWE gets paid by USA, they get paid a lot of money, and the money increases every year. Ratings aren’t the most important thing to them. And, let’s just be honest: ratings aren’t as precise as internet clicks and time spent on the website. If you look at that, WWE is crushing everyone. So I think ratings might not be the best metric with which to rate wrestling in this day and age. But it does mean they’ve got big distribution.

Let’s face it: when we were crazy into wrestling, there were 20 million people on Monday nights watching wrestling. So what you have are 17 million lagged wrestling fans. People who connect to it somewhere, but haven’t really found an inspiration or a cultural connection to it. That’s been missing because wrestling’s been dominated by one person. It’s like if every song on the radio had to go through the same producer. You would say that this is always the same thing because it’s always produced by the same place.

What there should be is more middle ground. There’s room for five or six of these federations because people love wrestling. People like you and I connect to it from a nostalgia view, from respecting the athleticism, and enjoying the characters and the story, and the live action production that is pro wrestling. It’s a special form of entertainment, and I think people miss [the ability to] go to a show and have fun.