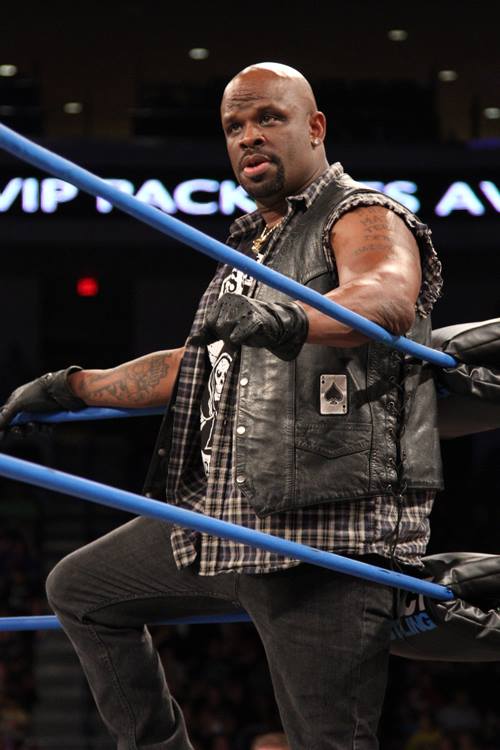 – Devon Dudley recently spoke with The Philly Voice to promote Sunday’s WWE TLC pay-per-view and the upcoming RAW in Philly. The full interview can be found at this link. Below are highlights:

PV: Do you have any current thoughts on retirement?

DD: “Brother, everybody thought we were done 10 years ago and we surprised the world. As far as I’m concerned, we’ll be 90 years old and still putting people through tables – whether it be at WrestleMania or an old age home – we’ll still be going on and on. It doesn’t matter, brother. We’re gonna rock from now until the day they tell us we can’t do it no more. And when I say ‘they,’ I mean the Good Lord above.”

PV: Since you guys returned to WWE, a lot of people thought you and Bubba Ray would win the Tag Team titles quickly. The New Day was kind of skating on a plateau before you guys came in, and then really upped their game. What do you think about The New Day in today’s tag team wrestling?

DD: “Love The New Day. Although I wanna put their behinds through a table, love them. They’re exciting, they’re new, they’re doing things Bubba and I would do without the dancing and the twerking. They love to get under people’s skin. Listen, this is no different than what Bubba and I used to do when we were trying to make a name for ourselves. These guys are going out there and doing it. Do they piss us off and get us angry? Absolutely. Do we realize that? Absolutely, because that was us at one point in time.

“New Day is an up and coming tag team. They’re doing extremely well. It’s only a matter of time before we take those titles away from them, so we’re going to let them have their day in the sun, do what they gotta do. Again, they’re an extraordinary tag team. We’re very, very happy to be in the ring with them, and for us to kick their butts, for them to kick ours, and we’re gonna make history. Just like we did with Edge and Christian and the Hardy Boys, we’re gonna be doing that with not only The New Day, but we’re gonna be doing that with the Usos, we’re gonna do it with every one of those tag teams in the WWE right now. We’re gonna make sure we go out there and just tear it down. We’re gonna continue where we left off.”

PV: You’re currently feuding with the Wyatt Family on television, and now you and Bubba have brought in Tommy Dreamer and Rhyno to even the odds. Do you think the Wyatt Family has a bright future as a group despite not exactly being a feared group?

DD: “Let me put it to you this way. The Wyatt Family are a creepy bunch of guys who are making history every time they get in that ring. Here’s the deal. Do I think they have a bright future? Absolutely. I mean, you got these guys, and they’re big and they’re huge, and they’re making an impact. So, you look at the Wyatt Family, you know, they’re giving the Dudleys a run for their money. How many people out there since we’ve been in this business that you know have been able to give the Dudley Boys a run for their money? No one has ever treated the Dudley Boyz the way the Wyatt Family has. That should tell you right there. That should speak volumes right there. So, therefore, we know we have our hands filled with them. We know that going into this pay-per-view at TLC that we’re gonna have to come out and bring everything. We’re gonna have to really take it to the extreme, and we’re willing to do that.”

“So, the Wyatt Family? Believe me. They’re gonna be as big as anybody could even imagine. Because, again, they have the talent, they’re a family, but the Dudley Boyz are gonna take care of business at TLC. Then, if they happen to stick their nose, which they probably will, at Monday Night Raw December 14th, well, you can guarantee one thing. The fans will know that when everything is said and done, when the smoke clears, at Monday Night Raw, somebody’s behind is gonna go through a table.”