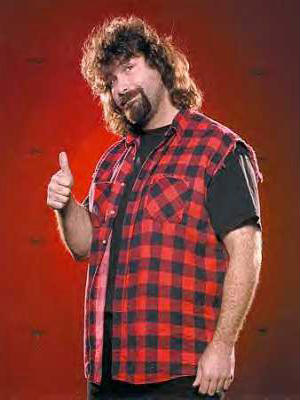 – Regarding rumors that WWE is hiring Mick Foley’s son Dewey Foley as a creative writer, I can confirm that is the talk going around WWE today.

I was told by a WWE source that Foley will begin working for WWE in early 2016 as a creative assistant but it’s not a full-time position and will depend on how he impresses officials.

It is worth noting that Dewey has been running a blog with his own WWE Creative ideas but that blog is now private. We’ve also heard reports from some of his longtime followers that he’s been deleting old tweets but that can’t be confirmed right now.

Dewey going to work for WWE creative is especially interesting because his dad has been speaking out against the WWE product a lot this year. One rumor on Dewey’s signing is that he’s known about it since at least early November, which makes Foley’s recent rants even more interesting.

You may remember last year a blog that Dewey wrote, taking shots at Triple H and Vince McMahon. Here’s what he wrote and a screenshot:

“Sorry people who know much about wrestling, but this company right now is in some serious shit. This is really bad for their company because one or two individuals truly believe that their opinions reign much higher over the millions and millions of people who watch their show religiously on a weekly basis. It’s such a horrible feeling obviously because it hits close to home. You have these guys who work their asses off 320+ days a year, who barely see their loved ones, and they get completely disrespected and disregarded because Triple fucking H thinks they’re ‘too small’ or not star material. My dad made your ass, and people told my dad all his life that he would amount to nothing. So Triple H should know from experience that the people that work their asses off and that are told that they are worthless, are the ones that make the company the best it can be. Without my dad, Triple H is just a mid-carder. My dad went out of his way to make sure that he turned Triple H into the intimidating, scary, cerebral assassin, son of a bitch that he has become. So it’s about time that people who deserve to be the best are given the opportunity to show it. WWE is a fucking dictatorship and it is just truly a shame.” 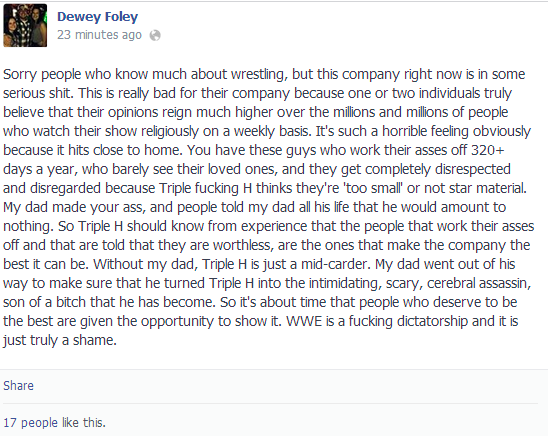