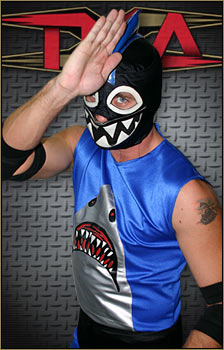 If you only know pro wrestler Shark Boy as Impact Wrestling’s bizarre, fish-themed parody of Stone Cold Steve Austin — or as the guy who sued Robert Rodriguez for using the name “Shark Boy” in a movie — get ready to think of him in a whole new light.

According to WHIO News, Shark Boy was recently instrumental in Catching A Predator in his neighborhood when he observed a local Peeping Tom and kept eyes on him until police arrived. Here’s the writeup from the site, which obviously does not go into detail about how a pervert got one-upped by a guy who makes a living wrestling in a shark costume with a leather vest.

A registered sexual offender is in jail again, this time for allegedly peeping through someone’s window.

Kettering police booked Daniel S. Reindel, 44, into Kettering Jail Tuesday on a felony count of voyeurism and a misdemeanor charge of criminal trespass. About 5:15 p.m. Tuesday, a resident in the 4000 block of Sunray Road reported they saw a suspicious male looking in the window of his neighbor’s house. The resident kept the man in his sight until officers arrived, Kettering police announced on Facebook.

Reindel is a registered sex offender and has previous voyeurism charges. Police said his charge Tuesday elevated to felony level because there were juveniles in the home.

The site also has Reindel’s mugshot, and it looks exactly like you’re imagining.