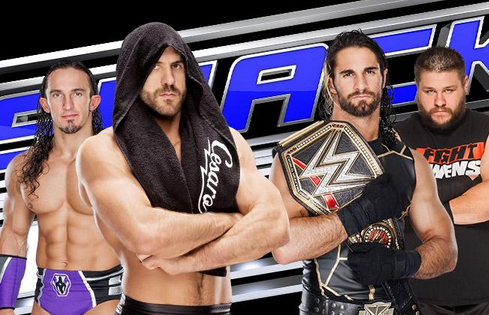 PORTLAND, Ore. —Just 10 days before The Biggest Party of the Summer, SmackDown featured a monumental tag team matchup, the ongoing Divas Revolution and the latest chapter in a highly personal family vs. family showdown.

WWE World Heavyweight Champion Seth Rollins kicked off the best show on Thursday nights, reflecting on his own “greatness” and on his SummerSlam showdown against John Cena. In the process, he dared The Champ to accept his challenge face-to-face on Monday’s Raw.

Neville, and then Cesaro, emerged to try and “shut up” The Architect. But a sneak attack by Kevin Owens — and a follow-up assault by Rollins — derailed their efforts. It was later announced that the four competitors would square off in a huge SmackDown tag team main event.

With the Divas Three Team Elimination Match at SummerSlam imminent, Charlotte made Naomi tap out to the Figure-Eight on SmackDown, bringing tremendous momentum home to Team PCB.

Ryback returned to SmackDown, grateful to the WWE Universe for their support and ready to put his title on the line against Big Show and The Miz at SummerSlam in a Triple Threat Intercontinental Title Match.

At SummerSlam, The Prime Time Players will put their titles on the line against Los Matadores, The Lucha Dragons and The New Day in a Fatal 4-Way Tag Team Title Match. But first, they had to battle Big E & Xavier Woods on SmackDown.

When The New Day members attempted to leave the match early, though, the other two combinations emerged to block their exit. And before Woods could clap his hands three times, Titus O’Neal hurled him into the ring, setting up Darren Young’s win with the Gut Check.

In the final moments of SmackDown’s tag team main event, constant interference by Kevin Owens and a handful of tights allowed Seth Rollins to roll up Cesaro for the victory.

But when KO continued his assault after the bell, The Swiss Superman turned the tides and sent him crashing to the canvas. And with Rollins nowhere to be found, Neville dropped in on Owens with the explosive Red Arrow.