Paige Catches WWE Hopefuls at the Mall, What Is Nidia Doing Now?, WWE Brawls In the Family 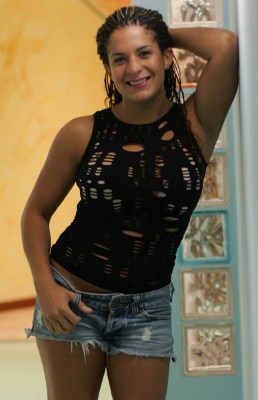 – The latest WWE Top 10 video looks at brawls in the family:

– WWE’s latest “Where Are They Now” feature catches up with the co-winner of Tough Enough season 1, Nidia Guenard. Nidia, who was released in November of 2004, now leads a Girl Scouts troop in her free time and is married with two kids. She commented on being a stay-at-home mom these days and gave advice to the current Tough Enough hopefuls:

“For me, I didn’t think I was going to be a mom, but after I decided that was the route we were going to take, it was very important for me to stay home. My parents didn’t stay home, but I was lucky that my grandparents took care of me. It was nice for me to have such a loving environment and someone who was always looking out for my best interest. That’s what I wanted to do for my kids.”

– WWE Tough Enough judge Paige surprised the competitors at a mall in Orlando yesterday. Apparently the group was supposed to be training instead. Below is a video and photo:

Just surprised all the @WWEToughEnough contestants at the mall. You all look the part but are you really tough enough? We'll see live tues!