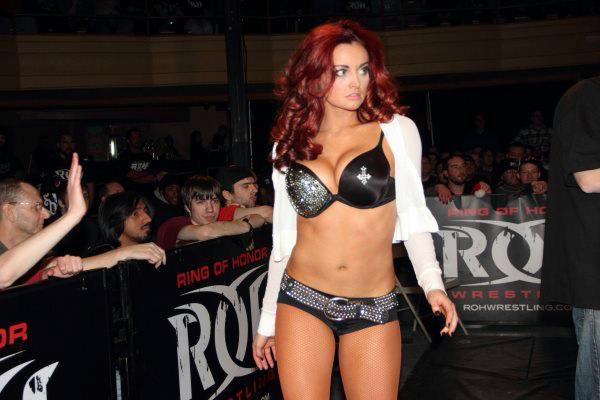 Maria Kanellis appeared on the IN THE ROOM podcast this past Tuesday, June 16, 2015 with Brady Hicks, former WCW wrestler The Stro, Kathie Fitzpatrick, and Jordan Garber. This show can be downloaded at both vocnation.com and thebradyhicks.com. Check it out as Maria offers her thoughts on ROH on Destination America, comparing the ROH and WWE locker rooms, and navigating politics in wrestling. Plus, the former Diva talks her famous red hair, Donald Trump, The Kingdom, and what she found so attractive about the man we all now hate: Mike Bennett. Here are some highlights:

On Her Initial Reaction Being Released by WWE:
I was caught off guard … I know what was going on behind the scenes, and that I was trying to accomplish other things. I think that WWE looked at it like I wasn’t as interested in wrestling because I wanted to do more. I think that they got the wrong impression of what I was trying to do, as well as I got the wrong impression of what they were trying to do. Looking back on it, now five years removed, I would have done things differently. I would have stayed the course. I would have shed a light on women’s wrestling back then, if I would have had the time. And that was being on a mainstream television show and also being in WWE. I think that we were just going in two completely different directions, and it takes time and maturity to be able to see those types of things, and now being removed from them, I definitely would have done things differently. But, at the same time, I’m very thankful that they did release me.

On Being the Bad Girl:
It was fun. It definitely came from a place of wanting to try something different. We joke about it now [that we’re] big in Japan, [and] boo’ed in the USA. In Japan we’re good guys. In the US, we’re bad guys. It’s all about performance. It’s all about messing with the crowd and really enjoying that … [And] the Kingdom is such a strong group because we’re all friends. We have that backstory … and that’s what works. These are all guys that go out together, and we all hang out together, and it’s so much fun that we get to perform together.

On Never Winning a Title:
I’ve been told on many, many occasions that championships don’t make or break a talent. So I don’t think of it like that. I think of it like how much of an impact can I make in women’s wrestling, whether I have a title or not. I think that right now, with going to New Japan and being the first female to wrestle against another female in New Japan, we’re breaking down boundaries. If somebody wants to give me a title for that, then that’s great. But at the same time, I don’t need that to define my career. Would it be cool to go back to WWE and win a title at some point? Yeah, sure. But at the same time, if I can accomplish more in Ring of Honor with Destination America, if I can accomplish more in New Japan, then it’s not high on my list.
IN THE ROOM airs live, weekly, Tuesday nights at 9 PM ET on the VOC Nation Radio Network (vocnation.com / thebradyhicks.com). Join Brady Hicks (Pro Wrestling Illustrated contributing writer), as well as The Stro (WCW’s Maestro), Kathie Fitz, Derrick McDonald, and Jordan Garber as they run down all that’s going on in wrestling, and sit down with some of wrestling’s top stars.