Official Announcement on Ring of Honor and Destination America 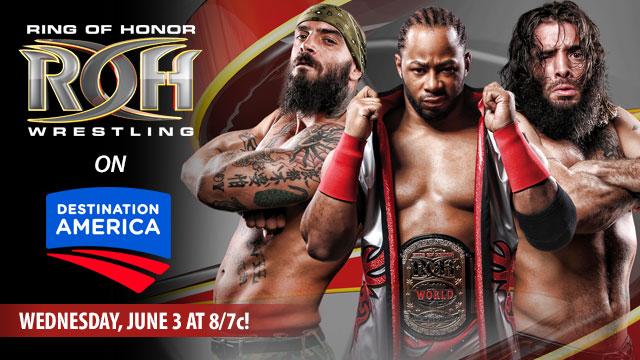 (Silver Spring, Md.) –Destination America announced today that it has signed a national broadcast deal with professional wrestling league RING OF HONOR, a wholly-owned subsidiary of Sinclair Broadcast Group, Inc., bringing one of the most respected wrestling organizations to the only network dedicated to all-American entertainment. Destination America is now the one-two-punch to professional wrestling, adding RING OF HONOR (ROH) to its line-up after launching IMPACT WRESTLING in early 2015. RING OF HONOR has been delivering top wrestling matches for ten years with captivating hard-hitting stars such as Jay & Mark Briscoe, AJ Styles, Samoa Joe, The Young Bucks, Maria Kanellis, Adam Cole and Jay Lethal. Destination America will pack on the action beginning Wednesday June 3 with the series premiere of RING OF HONOR at 8/7c leading into brand new premieres of IMPACT WRESTLING at 9/8c.

“With the electric and intense matches that RING OF HONOR provides, Destination America is the network for fans to get an entire evening of jaw-dropping entertainment on Wednesday nights,” said Marc Etkind, general manager of Destination America. “RING OF HONOR showcases tenacity, athleticism and passion and it serves as the place where America’s favorite wrestling stars are born.”

“We are very excited to be partnering with Destination America for the broader distribution of the ROH programming,” commented Joe Koff, Chief Operating Officer – Ring of Honor Wrestling. “ROH will now reach an additional 57 million households including those in New York City, Los Angeles, Chicago, Philadelphia and other large cities where Ring of Honor is not currently airing. ROH has a loyal fan base and is one of the fastest growing major wrestling franchises in the country. With this great partnership with Destination America, we can continue to expand our footprint and reach while producing entertaining, original content and continuing to provide wrestling fans some of the best wrestling content available.

RING OF HONOR will premiere on Wednesday, June 3 leading into IMPACT WRESTLING, making Destination America the home for wrestling every Wednesday evening. The first match will feature the Briscoe Brothers, Mark and Jay, as they face off with the House of Truth in the main event. Also catch athletes of New Japan Pro Wrestling battle it out with the RING OF HONOR stars and follow former NFL lineman Moose compete against BJ Whitmer.

Since launching in 2012, Destination America has become one of cable’s top fastest-growing networks, and continues to earn telecast ratings records among key series. In 2015 to date, Destination America has acquired over 50 million unique viewers. With top series that explore unique American cultures and ways of life – including Paranormal Survivor, Hillbilly Blood, Buying the Bayou, and BBQ Pitmasters – Destination America’s programming spans the nation from Alaska, Hawaii and Colorado to Louisiana, West Virginia and communities in between. To find Destination America, go to destinationamerica.com/watchda.