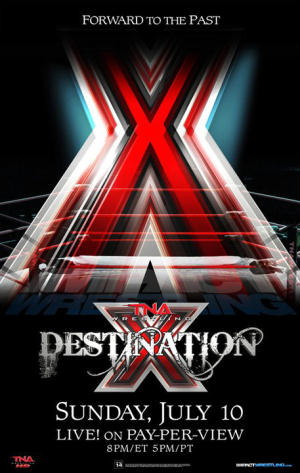 – TNA taped more content for future Impact Wrestling episodes on Monday night in Orlando. TNA now has taped up to the live Impact on June 26th so these matches should be for June 12th and June 19th. It’s likely that part of our spoiler report from Sunday night, labeled May 29th spoilers, were for the June 5th episode.

* Christy Hemme did the introduction for Destination X. Ethan Carter III and Tyrus come out and order her to leave. Ethan cuts a promo on Kurt Angle and being #1 contender. He takes a seat in the middle of the ring and says he’s not leaving until he gets his shot, saying Destination X has been canceled. Angle comes out and they argue but EC3 leaves with Tyrus.

* Kurt Angle defeated X Division Champion Rockstar Spud to retain the World Heavyweight Title. Angle shook his hand and raised Spud’s arm after the match. Austin Aries comes out with his briefcase and stares at Angle.

* The Dollhouse comes out and cuts a promo on Awesome Kong.

* The Dollhouse comes back and Taryn Terrell calls Kong out for the Lingerie Pillow Fight. The ring has a bed, pillows and other decorations set up. They crack jokes on Kong but out she comes. Taryn berates her for not wearing lingerie. Kong takes out Marti Belle and Jade and brawls with them up the ramp. Taryn tells Hemme to declare her the winner but Brooke Tessmacher comes out and knocks Taryn onto the bed, revealing her lingerie.

* Backstage segment with Joseph Park returning. He come to the ring to interrupt Bram and talks about how he’s gone through hard times but he’s here to stop Bram from hurting his brother Abyss. Bram lays him out.

* Bram defeated Park by putting him through a table.

* Kurt Angle defeated Austin Aries to retain the World Title. Aries tapped out to the ankle lock in a great match. Ethan ran out after the match and attacked Angle, standing tall with the World Title.

* James Storm and Magnus come out brawling from the back to set up a match later. Magnus is tired of The Revolution messing with Mickie James.

* Madison Rayne comes to the ring and cuts a long promo about the Knockouts Division. She says nobody but Gail Kim gets credit and she’s sick of it. She calls Velvet Sky out and slaps her. Velvet comes back with a stunner and a spear. Angelina Love comes out with security and Velvet is handcuffed when she tries to attack. Angelina talks trash and slaps Velvet before ordering security to have her arrested. Angelina ends up attacking a “fan” and also gets taken away in cuffs.

* Mike Tenay officiates the Slammiversary contract signing with Angle and EC3. They both cut promos and the match is made official. Tenay says both of them will wrestle on the next two Impacts and will pick each others opponent. Angle says Ethan will face Lashley tonight and Ethan will pick Angle’s opponent next week.

* Christy Hemme brings Chris Melendez to the ring to address Eric Young. Young comes out and we have a match for next week.

* The Wolves come out for a promo but are interrupted by Bobby Roode. Austin Aries can’t compete tonight so we get a singles match with the winner picking a stipulation for match 4 in the Best of 5 Series.

* Eddie Edwards defeated Bobby Roode. Davey Richards provided a distraction at one point but Aries ran down with a steel chair and threw it to Roode but it backfired on them. Richards announced that match 4 will be Full Metal Mayhem.

* Gunner and Mr. Anderson defeated Manik and Khoya in a match for Xplosion