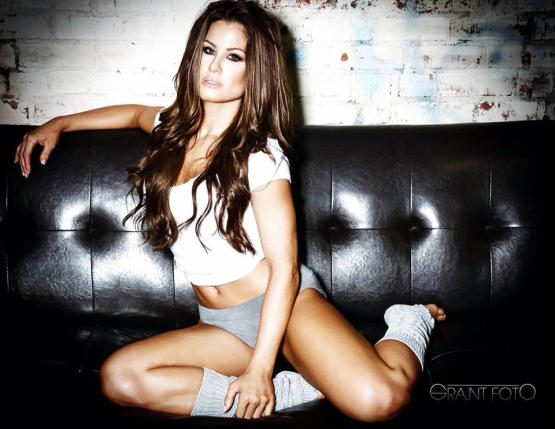 TNA Knockout Brooke Tessmacher (Brooke Adams) came on the IN THE ROOM podcast this past Tuesday, March 31, 2015, with wrestling journalist Brady Hicks and former WCW wrestler The Stro. This show can be downloaded at both vocnation.com and thebradyhicks.com.

Note: On March 15th, Brooke’s beloved dog Jawz was run over by a car and sustained severe injuries. In attempting to save Jawz’s life (he was sadly later put down), Adams set up an account to collect money toward his $15,000 in veterinary bills. To donate to this cause – and potentially help save other animals in similar situations – visit http://www.youcaring.com/pet-expenses/help-jawz-fight-for-his-life-/325997#.VRSLVJtaE2U

Here are some highlights from the interview:

On Fighting The Perception of Just Being “Hot”:
I had to give them that, because I [didn’t] know how to wrestle. So I have to at least be the sexy person with the big [butt] that bounces around with a pretty face. And now I have to go in and do double work to prove that I’m not only that. That’s what people want to see, because I’ve given them that, but it also tarnishes who I am as a wrestler.

On Her First Impressions Wrestling in TNA:
In the beginning … I had no idea what I was doing … I was so scared. I didn’t do this in WWE. I’m afraid I’m messing up and then getting fired. I was just so nervous. Even coming from such a big company and already going through it once, it helped me a little bit, but I didn’t have the wrestling down behind me to back it up so it just made me very insecure as a wrestler.

Winning the Title:
I think at the time they were like “Wow. She cares. She’s got some heart” … [Apart from] the few matches I had in the beginning, I came back and I was learning how to wrestle on my own and I was paying this guy to help me … I think they saw that and they wanted to give me a chance to flourish. And it happened to be a perfect time when we were going to be in Texas, my home state, so it all just worked out perfectly … They just saw that I wanted it. I was so hungry. I wasn’t tarnished at all from the business and being like “I’m old and grizzled. I don’t want to put [in] the workout.” I was like “You want me to jump off what?! What do you want me to do?! I’ll do it!”

All that, plus Brooke talks her disappointment from being taken off of TNA’s TV briefly; getting heat in WWE for Jawz making too much noise backstage; learning from TNA’s incredible women’s roster; being in Extreme Expose; and presenting more of a fun-loving character rather than being so serious.