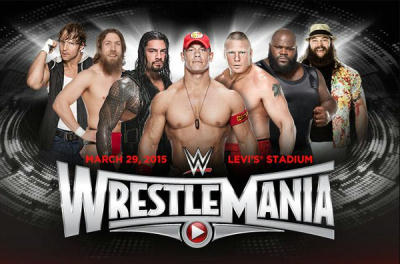 For the weeks of constant bad booking and insensible storytelling, I will give last nights efforts of Wrestlemania an overall favorable review, of course notwithstanding a few short-comings. I start as usual with the stage/set which unusually paled in comparison this year to previous efforts. With this being a west coast WM, outside and primarily in daylight, I understand the difficulties and challenges pertaining to the lighting ad production. I just feel that the audience has grown to expect a set grader than they can imagine. I personally envisioned the stage to resemble Alcatraz, with perhaps a Golden Gate bridge inspired ramp way. But a standard set aside the event did come off better than ever could have been expected. The Ladder match cluster, opened the show. Without question, this drew plenty of comparisons to the former Money in the Bank ladder matches. For some the fact that the IC title was featured in this manner was enough to redeem the prestige of the championship. For me I stand firm that a solid wrestling match between Daniel Bryan and Dolph Ziggler ad//or maybe Dean Ambrose would have done far more to redeem the prestige. Having said that, the match did provide an upbeat level of excitement, especially for the internet wrestling community with an abundance of high spots and their hero, Daniel Bryan, coming up victorious

Although I may have been most looking forward to Randy Orton vs. Seth Rollins heading into this event, I must say I was a tad-bit dismayed at this match. Not to say the match was bad at all, because it wasn’t I just feel Orton and Rollins didn’t have the chemistry together I hoped they would. I was quite impressed with the finish of this match though, especially after what would happen later in the main event.

Triple H vs. Sting I think was far better than I originally anticipated. Sting brought his A game and The Game himself was ready to play. I felt the additions of Degeneration X and NWO certainly ignited the live crowd as well as being a dream feud, 20 years in the making. However I felt and still feel was something that should have culminated I felt and still feel this was something that should have culminated circa 2002-2005 when the principles attached could still actually wrestle. Despite the average age of those running in being north of 50, it remained entertaining and nostalgic for fans of all ages. When I save the day for Sting, but unfortunately a save was not forthcoming. Aside from the petty “we won the war “ propaganda. I see nothing served or gained by HHH defeating Sting. Perhaps we was right in not wanting to come to WWE all these years.

AJ Lee & Paige vs. Bella Twins mechanically was above par, but still wasn’t anything spectacular. How long has it been since we’ve seen a competitive 1-on-1 match for the ladies/divas title at WM. WM used to be about meaningful matches culminating between the best of the best. Not everyone and their grandfather getting a spot on the show so everyone can get a pay day.

John Cena vs. Rusev was of little consequence to me. I’m not a big fan of Rusev’s work or character and Cena’s lack of development of late has done little to build anticipation for anything he does. The match was solid but without any real dramatic effect. I wasn’t expecting much here and I think I got what I was expecting.

The highlight of the night for me was the interactive segment between Triple H, Stephanie McMahon, The Rock and Ronda Rousey. Stephanie and Hunter generated tremendous heat while the Rock electrified the crowd. But Ronda’s appearance and subsequent hip toss on Trips was as legit a Mania moment as has ever been witnessed. I noted on twitter last night that if WWE is wanting to fill 100000 people into Cowboys Stadium. Look no further than Ronda Rousey vs. Stephanie McMahon.

Bray Wyatt vs. Undertaker did ot work for me very much mostly due to the fact that both men pre-set an aura that is best produced with darkness and lighting effects. Such production that was not available during daylight hours on the west coast. Wyatt may have been injured heading into this as well which assisted in presenting a slower paced match held together with the basics of both men. The other sour point I had with this is Bray Wyatt being pegged as one of WWE’s brightest prospects for the future yet he has now started his WM legacy 0-2. These are the matches people will remember.
The main event was the biggest surprise for me. Although I have 100% faith in Brock Lesnar as a wrestler, I was pleasantly surprised with the level of psychology as well as the physical push back of Roman Reigns. I think Roman’s performance last night will go a long way with winning the fans back and becoming a long term main event star with WWE. I’m still not sold on Seth Rollins cashing in his Money in the Bank contract. For me I feel Brock was bringing a level of prestige and honor back to the WWE championship not felt since Bret was champion. But I will keep an open mind and at least see where it goes.

All in all a far greater Mania than I possibly could have expected! Now the road to Wrestlemania 32 begins. If WWE plans on trying to break attendance records they will need to be on their game this year in all aspects of booking. The key will be to build new stars, but also trot out some old horses out of the stable. What dream matches do you want to see next year?