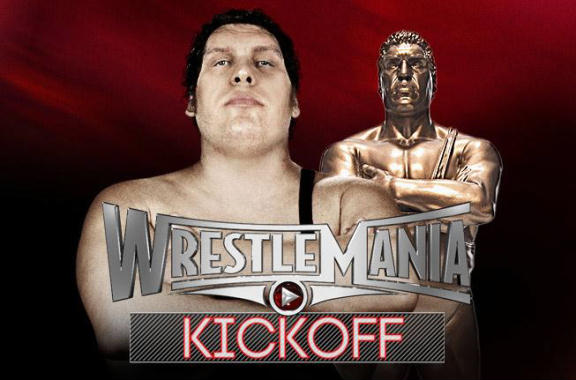 The WrestleMania 31 Preshow kicks off from Santa Clara, California with a video package of LL Cool J and various highlights of the past few WrestleManias. We go into Levi’s Stadium and join Rene Young, Byron Saxton, Booker T, and Corey Graves. Rene reminds us of the two matches taking place on the preshow, the Fatal Four-Way for the WWE Tag Team Championship, and the second-annual Andre the Giant Memorial Battle Royal. Booker says winning the Battle Royal is a history-making moment and says The Big Show will win it. Rene kicks it over to Tom Phillips in the Social Media Lounge. Phillips says WWE Hall of Famer Lita will be joining him in the Lounge later on for a live Q&A session. Phillips hypes the United States Championship match between Rusev and John Cena, and we see a video hype package for the ongoing feud between the two men.

We see a live shot of Rusev and Lana backstage. Lana says that she will never show compassion again, and Rusev he will crush John Cena and that American will die. We then see the WWE Network commercial.

We go back to the Preshow Panel. Byron says Lana being back will not matter, because Rusev is ready to rip John Cena apart. Graves says Lana is an X-factor that Cena has to worry about and he needs to watch out for her. We then see John Cena’s appearance on Jimmy Kimmel Live where he is fired up and cuts a promo on how American he is and how he will take the United States Championship away from Rusev. Byron says Rusev wrote the book entitled “The Idiots Guide to Ticking off John Cena,” and Cena will show the world and Rusev that American can conquer anything. Rene asks where Rusev goes if he loses tonight, and Graves says he can go anywhere he wants and he doesn’t see Cena getting past Rusev tonight. Booker says Rusev is the guy who backs up everything he says and says his money is on Rusev tonight.

We go backstage where Eden is trying to get a word with the COO of the WWE, Triple H. She knocks on the door, but Kane shows up and says the office is off-limits. She says she could maybe come back later, but Kane tells her to just leave. We then see the video hype package for the feud between Triple H and Sting. We go back to the panel, and Booker T agrees with Sting. He says it is not about WCW because that war ended long ago. Booker says he will not call a winner, because he just wants to sit back and watch. Byron brings up that Triple H has said that outside of his wife and kids, the WWE is the most important thing in his life and he will be whatever it takes to win. Braves says if Triple H were to lose, it would be catastrophic from the top to the bottom.

We go backstage and see J&J Security. Noble says Rollins is going to destroy Orton and complains that there is no sugar for the coffee. Bricso and Patterson walk in and say they are saving it for Mr. McMahon. J&J Security walk away and Patterson calls them stooges.

We see that Kid Ink and Skylar Grey will be performing live at WrestleMania later tonight, and then we see the video hype package for the feud between Randy Orton and Seth Rollins. Graves says Rollins has proven he is the young lion who wants to lead the pack, while Orton wants to get his revenge on Rollins. The preshow panel reminds us of the two matches on the preshow again.

We take a look at what various activities the WWE Superstars and Divas participated in over the past week leadung up to WrestleMania. The panel talks about the fans traveling from all over the world and how cool it is, and then they begin talking about the Hall of Fame ceremony from last night. We now take a look at the feud between the Bella Twins and AJ Lee and Paige. The panel talks about whether or not they think Paige and AJ can coexist enough tonight to take out a common enemy in the Bella Twins.

We now see the video hype package for the match between Bray Wyatt and The Undertaker. Rene says that we don’t know “what version” of the Undertaker that we will see tonight. Byron says tonight is Bray Wyatt’s moment, but Wyatt may be in over his head. Booker says Wyatt has talked a great game, but it is the actual game time now. Booker says he wrestled Undertaker at Judgment Day in 2004 and he thought he had it all figured out, but when the lights went out he lost it all. Graves says there is no one in WWE that walks the line of madness and genius like Bray Wyatt. Graves says Wyatt is not scared of the Undertaker and time is on Wyatt’s side.

We see that Aloe Blacc will sing “America the Beautiful” to open the show tonight. Rene brings up tonight’s main event between Brock Lesnar and Roman Reigns, and then we see Lesnar’s appearance on SportsCenter earlier this week, where he announced that he has re-signed with the WWE. Graves says when Lesnar signed his new contract, he put the entire WWE roster on notice and that he will be the Champion for a long time. Booker says Lesnar will defend his championship and will try to end Reigns very quickly tonight. Booker says Lesnar will begin to question himself if he cannot end Reigns quickly, however. Byron says Reigns is the first member of the Shield to potentially make it to the top tonight. We see a video hype package for Roman Reigns and Brock Lesnar. The first hour of the preshow concludes with the panel talking about tonight’s main event.

The second hour begins with the panel again, but they toss it down to Michael Cole, John Bradshaw Layfield, and Jerry Lawler, and our first match of the evening is out to begin. WWE Tag Team Championship Fatal Four-Way Match: Cesaro and Tyson Kidd (w/Natalya) vs. Los Matadores (w/El Torito) vs. The New Day (w/Xavier Woods) vs. The Usos (w/Naomi)
Cesaro and Kingston start the match and Kingston drops Cesaro with a dropkick. One of the Matadores tags himself in and Cesaro goes crazy and slams Jey into the barricade. Kingston and the Matador are in the ring. Diego tags in, but Cesaro tags right back in and goes to work on Kofi as Jey Uso is helped to the back. Cesaro knocks Big E to the floor and Cesaro tags in Kidd. Cesaro swings Kingston and Kidd drops an elbow on Kingston and goes for the cover, but Kingston kicks out at two. Kidd dumps one of the Matadors to the floor. Jimmy Uso stands on the apron and is going to go it alone. Jimmy tags in and drops Kidd and Cesaro with Superkicks. He then drops Big E and one of the Matadors with a superkick. He smashes all four guys in the corner and turns his attention to Kingston. Kingston ducks and springboards to the outside. Jimmy goes for the cover on Kidd, but Kidd kicks out at two. Jimmy drops Kidd with a right hand, but Cesaro catches Jimmy with an uppercut. Big E tags Jimmy and squashes Cesaro and Jimmy. Big E and Kingston double-team Cesaro and Kingston goes for the cover, but Cesaro kicks out at two. One of the Matadors tags in, and Kingston takes him to the top rope. Cesaro suplexes Big E into the ring and the Matador slams Jimmy down onto Cesaro. The Matadores deliver a double-back stabber to Kingston and go for the cover, but Kidd breaks it up. Kidd drops one of the Matadors, but Kingston takes Kidd down. El Torito drives Kingston into the barricade and then Natalya locks Torito in the Sharpshooter. Naomi and Jimmy launch through the ropes and take everyone now. Naomi takes Natalya out with the Rear View. Big E and Kingston drop one of the Matadors with the Big Ending, but Jimmy breaks it up. It’s an all-out brawl in the ring, but one of the Matadors and Big E are left in the ring. Big E is not legal, according to the referee. Big E slams the Matador down and splashes him in the corner. Kidd gets into the ring, but Big E catches him. Jimmy drops Big E with a superkick, but then Kidd and Cesaro drop Jimmy. Kingston takes out Kidd and goes after Cesaro. Cesaro uppercuts Kingston and then slingshots one of the Matadors into Kingston. The Matadores go after Kingston now, but Kidd cuts them off. We have a Tower of Doom sequence and everyone is down. Jimmy splashes down onto Big E, but Cesaro tosses him out of the ring and pins Big E for the win.
Winners and still WWE Tag Team Champions: Cesaro and Tyson Kidd.

We take a look at ESPN’s Jon Gruden’s QB Camp, but instead of quarterbacks, he is studying the competitors in the Andre the Giant Memorial Battle Royal. Andre the Giant Memorial Battle Royal
Curtis Axel rips his shirt off and everyone eliminates him. It appears there are more than the announced twenty guys in the ring. Fandango and Adam Rose battle on the apron and they eliminate each other. Mizdow and Miz double-team Riley and Mizdow eliminates him. Zack Ryder goes for the Broski Boot, but Bo Dallas eliminates Ryder. Dallas celebrates and jumps out of the ring, but Hideo Itami eliminates Dallas. Big Show eliminates Itami. Kane eliminates both guys of Los Matadores. Cesaro eliminates Sin Cara. Mark Henry eliminates Tyson Kidd. The Ascension go after Mark Henry and eliminate him. Ryback eliminates both members of the Ascension. Ryback eliminates Darren Young and Heath Slater. Titus O’Neil drops Ryback with a clothesline. Ryback tosses O’Neil over the top rope with a suplex. Ryback drops Jack Swagger with Shell-shocked, but Big Show eliminates Swagger. The New Day try to eliminate Big Show, but Show eliminates Big E and Xavier Woods and then Kofi Kingston. Erick Rowan is eliminated as is Goldust. Kane drops Ryback and then double-chokeslams Miz and Mizdow. Kane tosses Cesaro to the apron, but Cesaro holds on. Cesaro eliminates Kane. Jimmy Uso kicks Cesaro, but then Show eliminates Jimmy. Big Show, Cesaro, Miz, Mizdow, and Ryback are left. Show eliminates Cesaro. Ryback drops Big Show, but Show eliminates Ryback. We are down to Miz, Mizdow, and Big Show. Mizdow says he will not work with Miz, but Miz tries to talk to him. Miz pokes Mizdow in the chest and pisses off Mizdow, but Mizdow eliminates Miz. We are down to Mizdow and Big Show. Show takes Mizdow down with a shoulder block. Show charges at Mizdow, but Mizdow pulls the ropes down and Show goes over the top, but Show holds on. Show grabs Mizdow around the throat, but Mizdow gets Show in a headlock. Mizdow pulls Show over the top rope, similar to the 2004 Royal Rumble, but Show shoves Mizdow over the top rope and gets the win.
Winner: The Big Show.